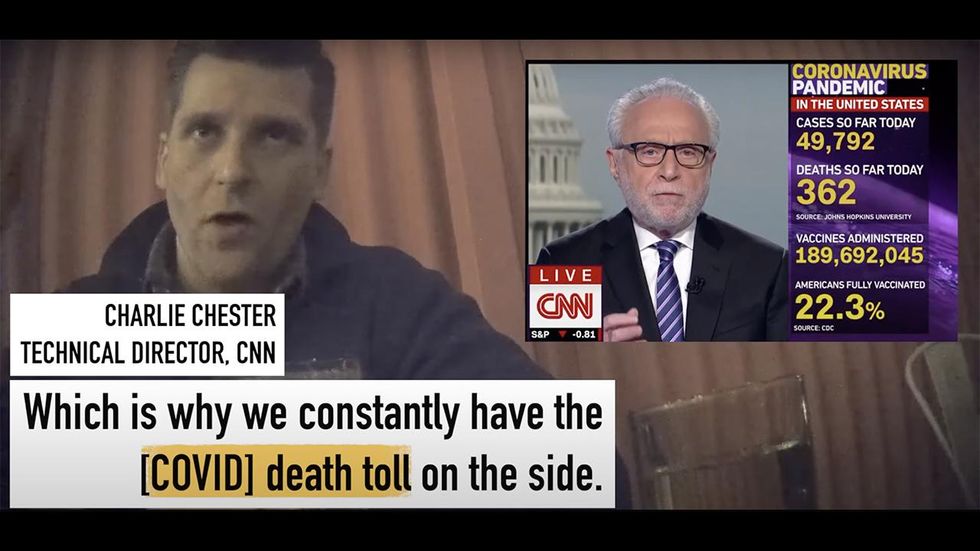 We all know that CNN does these things. We all know these conversations happen. And that the people who work there suck at life. It still makes you stabby to hear these things out loud. Yesterday, Project Veritas introduced us to Chester. Charlie Chester, but Chester is the more embarrassing name. Today’s drop has Chesster unknowingly admitting to an undercover reporter that CNN not only knows they exploit pandemic fear for ratings, they purposely do it.

COVID? Gangbusters with ratings, right? Which is why we [CNN] constantly have the [COVID] death toll on the side, which I have a major problem with – with how we’re tallying how many people die every day. …

The special red phone rings … and this producer picks it up. … Every so often they put it on speaker, and it’s the head of the network being like, “There’s nothing that you’re doing right now that makes me want to stick. Put the [COVID death toll] numbers back up, because that’s the most enticing thing that we had. So, put it back up.”

Let’s be fair to Chester. Only because it’s only a matter of time before the “independent” “fact” checkers circle the wagons. There is a chance that Chester was lying. It’s been established that Chester thought he was on multiple Tinder dates. Chester could have been talking out of his hind parts in order to talk his way into his “date’s” pants. Us guys say all sorts of crazy things for sex. Another few undercover video releases, we might hear Chester claim HE’S the one who tells Brian Stelter to cry about Tucker Carlson all the time. And that CNN would be LESS biased if not for Chester pulling the strings. Chester is obviously desperate, so we’ll see what else is released.

Looking for a fashionable way to support Louder with Crowder? Get your swag at Crowdershop today!