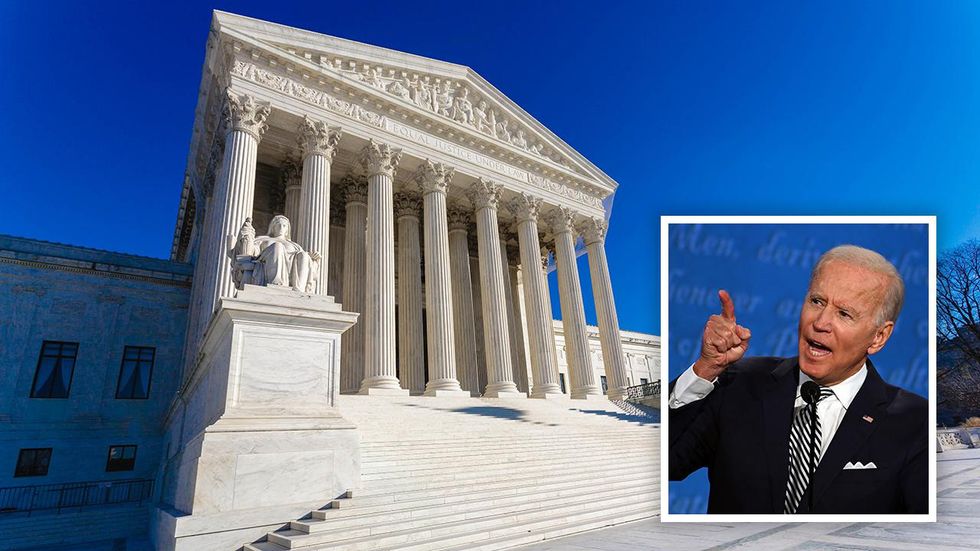 Donald Trump did what no other president has done: Nominated THREE justices to the Supreme Court and shifted the balance of power toward people who know what the Constitution is. Neil Gorsuch filled the opening that Trump inherited from his predecessor. Brett Kavanaugh was appointed to swing things in the conservative direction. Then after Ruth Bader Ginsburg croaked, she was replaced with the glorious Amy Coney Barrett. Only the NeverTrumpers with the most hurt of butts can’t tip their hat to a 6-3 Supreme Court. Stunning victory for conservatives.

So of course bitter leftists want to pack the courts and, according to the New York Times, are bullying Joe Biden into it. “Bullying” is my word.

President Biden on Friday will order a 180-day study of adding seats to the Supreme Court, making good on a campaign-year promise to establish a bipartisan commission to examine the potentially explosive subjects of expanding the court or setting term limits for justices, White House officials said.

The president acted under pressure…

I.E. bullied by leftists who are threatening to take his tapioca and evening Golden Girls away.

…from activists pushing for more seats to alter the ideological balance of the court after President Donald J. Trump appointed three justices, including one to a seat that Republicans had blocked his predecessor, Barack Obama, from filling for almost a year.

Traditionally, “bipartisan commissions” are what politicians form to avoid having to make hard decisions themselves. Or really, do much of any actual work. Under normal circumstances, you could roll your eyes at such a stunt. But this is Joe Biden, or more specifically, the people who shove their arms up Biden’s sphincter and control him like a sock puppet. I’ve got thousands of unemployed pipeline workers and tens of thousands of illegal immigrants who say this commission needs to be taken seriously.

And spare me the “bipartisan” part. Unless he’s going to team up John Kasich, Bill Kristol, and Jen Rubin with AOC, Vox, and Ruth Bader Ginsburg’s grandkids.

The announcement was only just made and we have 180 days of progressive activists looking to cyberbully commission members into doing their bidding. If you needed another issue to pay close attention to, this is a YUGE one.

Looking for a fashionable way to support Louder with Crowder? Get your swag at Crowdershop today!