A USA Today/Suffolk University poll released Sunday revealed that around half of Republicans are willing to leave the party behind and jump ship to a Trump led third party.

The findings serve as a stark reminder to the party that President Trump is still the preeminent figure in US conservative politics.

The poll reveals that 46% of Republicans would follow Trump to a new party, with only around a quarter (26%) saying they would stay with the GOP. The remaining respondents are undecided.

The poll also found that a majority of Trump voters (54%) are more loyal to the candidate than the GOP (34%).

Only 19% said that they feel voters should ditch Trump and embrace establishment Republicans in the GOP.

The poll also found that the Democrat impeachment show trial made just 4% of Republican voters less supportive of Trump, while 42% say it made them more supportive, and 54% say it didn’t affect their support.

Look sharp by wearing exclusive gear found only at our store.

The poll found that Trump voters want him to run again in 2024 by a 2-1 margin, with 85% saying they would vote for him in a general election. 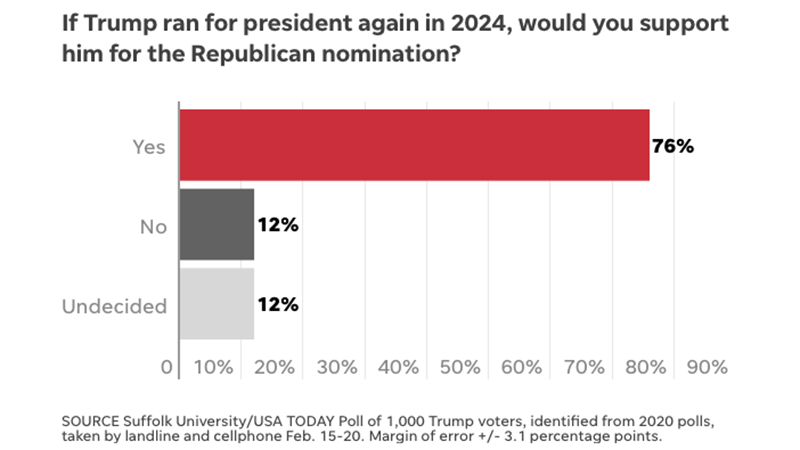 Suffolk University Political Research Center Director David Paleologos also noted that, according to the poll, there has been “a seismic shift in the landscape of trusted news sources for conservatives in the country.”

Just before Trump was elected in 2016, Fox News had a 58% trust rating among conservatives. That is now down to just 34%.