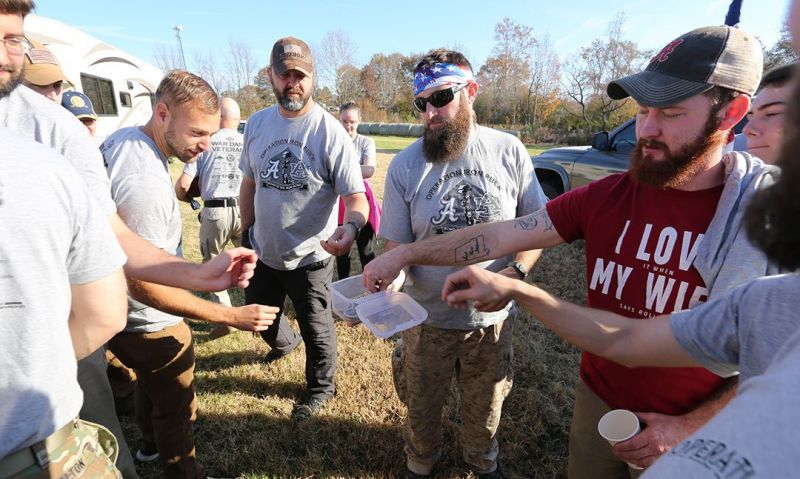 Ben Shewmake says the goal of Operation Iron Ruck is to bring the University of Alabama and Auburn University together while raising awareness about the issue of suicide among veterans.

Members of UA’s Campus Veterans Association marched alongside Auburn’s Student Veterans Association in the third annual Operation Iron Ruck, which began Nov. 25 in Auburn and ended Nov. 28 in Tuscaloosa before the Iron Bowl between the Alabama and Auburn football teams.

According to Mission 22, a national veteran suicide campaign, 22 veterans commit suicide each day.

“The awareness is not to say, ‘Hey this is happening,’ but more to tell the ones who are thinking about it that there are people who care and are here if they reach out,” said Shewmake, the president of UA’s Campus Veterans Association.

Shewmake said a simple phone call or text can help in the effort to help veterans.

“There is also a newer message that is popping up that is to tell everyone to keep in touch with their former colleagues and that one random text or call to someone may keep them from committing suicide and no one will probably ever know that.

“It’s as much to tell those who may be struggling that people care as it is to tell the people who care to reach out rather than wait on being reached out to.”

According to a news release, during the three-day trip, each student veteran hiked about 50 miles and walked for 2 1/2 hours before climbing into a support vehicle for about five hours of rest before their next hike.

Student veterans from UA and Auburn carried 22 pounds of materials that will be donated to 3 Hots and a Cot, a Birmingham-based nonprofit organization that assists homeless military veterans in making the transition from life on the streets into a self-sustained lifestyle. The weight carried represents the 22 veterans who commit suicide every day.

Shewmake said participation in this year’s Iron Ruck was limited because of the COVID-19 pandemic and many of the traditional activities, such as a tailgate and other fellowship opportunities, were adjusted to comply with safety guidelines from the Centers for Disease Control , the state of Alabama and both universities.