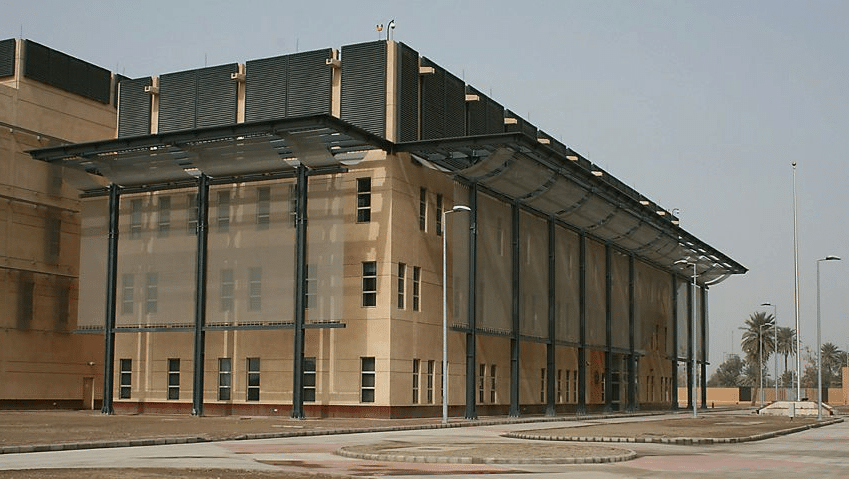 Several rockets landed near the U.S. Embassy in Baghdad on Sunday night, causing some damage to residential buildings near the embassy compound.

In a Sunday press statement, U.S. Secretary of State Mike Pompeo attributed the rocket attacks to Iran-backed militias operating in Iraq. He said no embassy staff were injured in the attack, but the rockets did damage nearby civilian Iraqi property and injured at least one Iraqi civilian.

“Iran-backed militias are the most serious impediment to helping Iraq return to peace and prosperity. The same militias targeting diplomatic facilities are stealing Iraqi state resources on a massive scale, attacking peaceful protesters and activists, and engaging in sectarian violence. We call on all Iraqis to support their government’s efforts to reinforce Iraq’s sovereignty, to bring to justice those responsible for these reprehensible attacks and ensure that all the currently Iran-backed militias are under state control,” Pompeo said in the statement.

Footage of counter rocket and mortar (CRAM) systems firing at incoming rockets was shared on social media Sunday night. The authenticity of the videos could not be confirmed, however.

Further photos and video showed some of the rockets impacting, hitting residential buildings in area.

Further photos showed some of the damage inside the apartment building after the rocket impact.

The embassy in Baghdad tweeted, “The U.S. Embassy confirms rockets targeting the International Zone resulted in the engagement of Embassy defensive systems. There was some minor damage on the Embassy compound but no injuries or casualties.”

“Some additional images from an apartment struck by one of the rockets in this evenings rocket attack,” Aurora Intel tweeted. “Reports of a new explosion heard in #Baghdad, Iraq.

On Sunday, Secretary of State Mike Pompeo tweeted, “Iran-backed militias once again flagrantly and recklessly attacked in Baghdad, wounding Iraqi civilians. The people of Iraq deserve to have these attackers prosecuted. These violent and corrupt criminals must cease their destabilizing actions.”

While the U.S. blamed the Iran-backed militias for the attacks, one Iran-linked group, the Kata’ib Hezbollah, disavowed the attack.

Aurora Intel tweeted, “Kata’ib #Hezbollah condemns the attack this evening against the #US Embassy, The Green Zone, #Baghdad, #Iraq. – The timing is wrong – Civilian(s)/civilian(s) buildings can be targeted. – Military activities are not welcome from within civ areas of #Baghdad.”

Aurora Intel added, “#Iraq|i Security confirm the attack by “an outlaw group”. The launcher of the rockets was found near Camp Rashid.”

Previous rocket attacks by Iran-backed militias have targted the U.S. embassy and U.S. military bases in Iraq. In December of last year, the Iraqi militias launched a rocket attack that killed one U.S. citizen and injured four more U.S. service members. The U.S. responded with retaliatory airstrikes against the militia groups. Following the U.S. strikes, supporters of the Iraqi militias held destructive demonstrations outside the U.S. Embassy compound days later.

The escalating tensions between the U.S. and Iraqi militias near the end of the 2019 year came ahead of the January U.S. strike that killed Iranian Gen. Qassem Soleimani as he traveled in Baghdad with leaders of the Iraqi militias.

The latest set of rocket attacks now comes after a U.S. assessment that Iran is still seeking revenge for Soleimani’s killing. Last week, reports circulated among U.S. officials, that the Iran-backed Iraqi militia groups had moved to a “heightened level of preparation” and that they already had the weapons in place to launch new attacks.