The [CB] are now desparate, they know they do not control the narrative and their system is failing. They are pushing to bring down the world economy but it cannot look like they are the cause. Solar storm, hacking are all being pushed. The [DS] has been warned countless times, they all walked through the front door, that is they [knowingly] worked with a foreign country to manipulate the elections. DNI Ratcliffe will be handing over a report about foreign election interference, this is where everything changes. The [DS] will react to this, most likely a blackout. We now have dueling electors casting votes, the MSM is pushing their side but they know they will lose in the end, messages are sent, the patriots have it all.

Protect Your Retirement W/ A Gold. IRA
https://noblegoldinvestments.com/gold-silver-ira-google/?offer_type=gold&affiliate_source=affiliate_x22
Noble Gold is Who I Trust ^^^
Or Call 877 646 5347

✅ Enjoy The Healthy Aging Support of Collagen 🔥
😍 Get 51% Off Ageless Multi-Collagen Here http://www.healthwithx22.com/
This is my FAV trusted source ^^^^💪💪 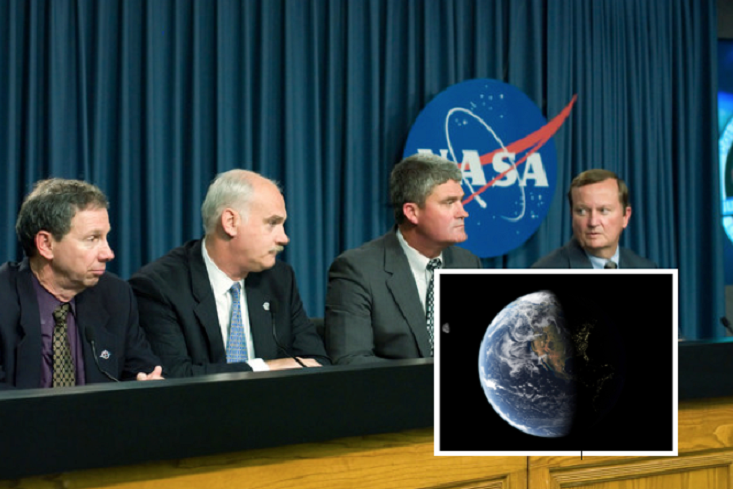 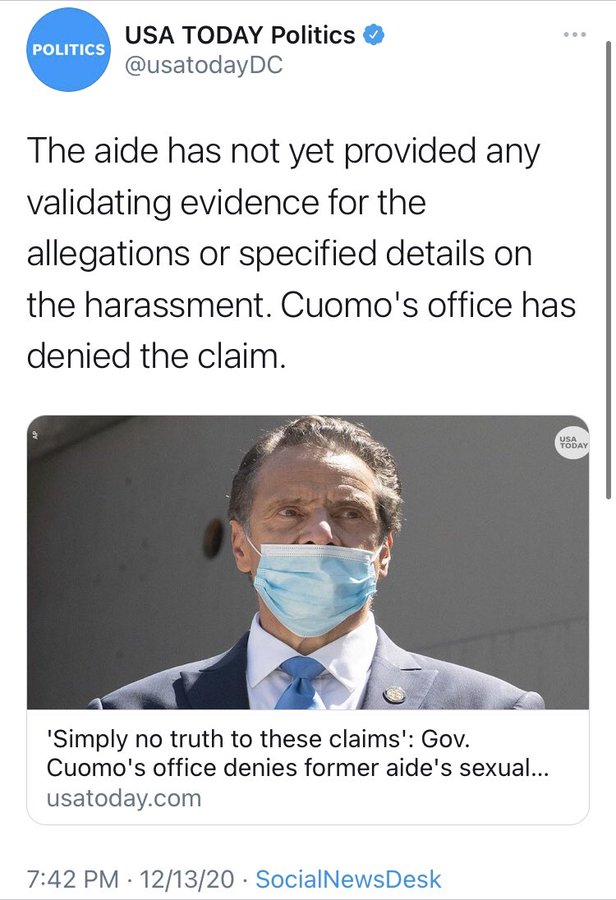 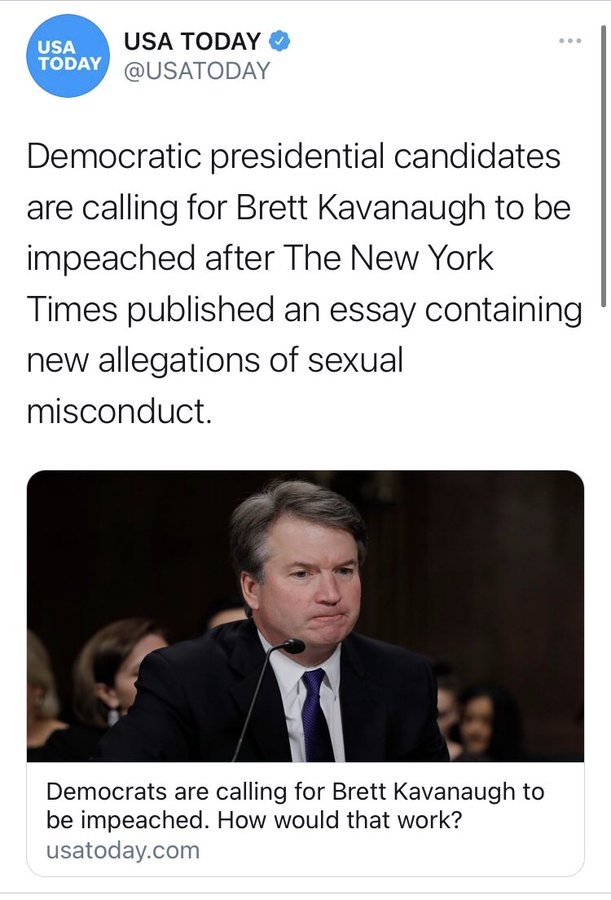 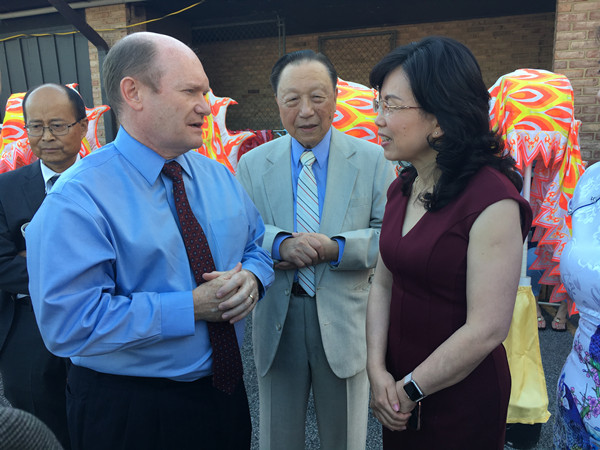 Lets see who else has a close relationship with Christine Fang (Fang Fang). pic.twitter.com/OH5f8XpFUo

Are you curious why some legal cases are being thrown out without even being heard?
Someone close to one of these judges has reached out to me saying judges and their families are getting death threats over election fraud cases.
Im not going to name names, but now you know.

Hey @FBI @GBI_GA @BrianKempGA @GeoffDuncanGA & @GaSecofState, why are there boxes of GA mail ballots hidden in warehouse in Fulton County, many shipped from Arizona?

GA election was a fraud. Do your damn jobs. pic.twitter.com/o2bWi6g8LI

Swing States that have found massive VOTER FRAUD, which is all of them, CANNOT LEGALLY CERTIFY these votes as complete & correct without committing a severely punishable crime. Everybody knows that dead people, below age people, illegal immigrants, fake signatures, prisoners,….

….place in Detroit, Philadelphia, Milwaukee, Atlanta, Pittsburgh, and elsewhere. In all Swing State cases, there are far more votes than are necessary to win the State, and the Election itself. Therefore, VOTES CANNOT BE CERTIFIED. THIS ELECTION IS UNDER PROTEST!

JUST IN: Georgia Secretary of State says his state will conduct a limited signature audit

The MSM will continue with their narrative, they will   tell you that today all of the states sent electors for Joe Biden and its all over. This is why the SM changed their terms of service, they don’t want anyone interfering with their narrative.   Remember their are  competing slates of electors that are being sent in many contested states

Thread: In the 1960 presidential election in Hawaii between Kennedy and Nixon, the governor issued a certificate to the Republican slate of electors while there was an ongoing controversy about the vote count.

3) The recount revealed that Kennedy had in fact won, but electors for Nixon had already been certified.

5) The VP of the Senate, ironically Nixon, said it was the governor’s electors that should prevail, there was no disagreement, and Kennedy received Hawaii’s electoral votes.

6) My thoughts in light of the obvious fraud and unreliable vote counts are that 1) the legislatures in AZ, WI, PA, GA, and MI should send their own certificate, and/or 2) that the GOP should tell the Republican electors in each of these states to meet & send a certificate.

7) The Republican electors are chosen. They should meet and send their certificate for Trump and let it work itself out in Congress.

Today, Trump electors, from the state of Michigan, were denied entry to the Michigan State Capitol after Governor Whitmer and other officials sent 200+ troops to guard the building.

The [DS] players are panicking, they are sending messages

I believe we should abolish the Electoral College and select our president by the winner of the popular vote, same as every other office.

But while it still exists, I was proud to cast my vote in New York for Joe Biden and Kamala Harris. pic.twitter.com/th9qebu9ka 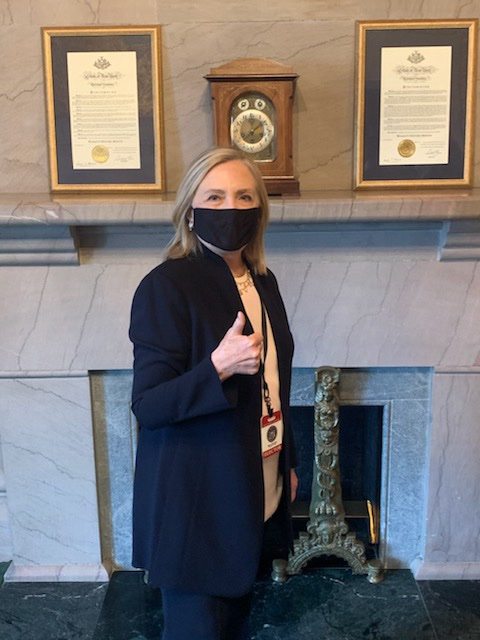 Why are they panicking, the Dominion systems forensenic audit report was released.

Remember: Antrim County is the place where the Dominion machines allegedly switched some 6,000 Trump votes to Biden. https://t.co/1QgkKos4lO

The audit of the Dominion machines in Antrim County was conducted on Dec. 6 by Allied Security Operations Group, a cyber security firm near Dallas.

But until now, a court order has kept the results of the examination a secret.

“We conclude that the Dominion Voting System is intentionally and purposefully designed with inherent errors to create systemic fraud and influence election results.”@EpochTimes

“The allowable election error rate established by the Federal Election Commission guidelines is of 1 in 250,000 ballots (.0008%). We observed an error rate of
68.05%. This demonstrated a significant and fatal error in security and election integrity.”

“A staggering number of votes required adjudication. This was a 2020 issue not seen in previous election cycles still stored on the server … The intentional errors lead to bulk adjudication of ballots with no oversight, no transparency or audit trail. “

“The lack of records prevents any form of audit accountability, and their conspicuous absence is extremely suspicious since the files exist for previous years using the same software.” #DominionVotingSystems

“Removal of these files violates state law and prevents a meaningful audit, even if the Secretary wanted to conduct an audit. We must conclude that the 2020 election cycle records have been manually removed.” #DominionVotingSystems

“Other server logs before November 4, 2020 are present; therefore, there is no reasonable explanation for the security logs to be missing.” #DominionVotingSystems

“These system changes affect how ballots are read and tabulated, and our examination demonstrated a significant change in voter results using the two different programs.” #DominionVotingSystems

“Our findings show that the Central Lake Township tabulator tape totals were significantly altered by utilizing two different program versions (10/23/2020
and 11/05/2020), both of which were software changes during an election which violates election law…

… and not just human error associated with the Dominion Election Management System. “

“Based on the preliminary results, we conclude
that the errors are so significant that they call into question the integrity and legitimacy of the results in the Antrim County 2020 election to the point that the
results are not certifiable…” #DominionForensicReport

“… Because the same machines and software are used in 48 other counties in Michigan, this casts doubt on the integrity of the entire election in the state of Michigan.” #DominionForensicReport

The Michigan Secretary of State has ordered deletion of e-poll books and other evidence, and has taken affirmative steps to seal forensic evidence regarding the flaws in the operation of Dominion machines from the public view and also from legislators.

A company that provides voting systems in 28 states uses an Internet technology firm that was hacked.

Dominion is still not powered down.

Send this to anyone claiming this happened AFTER @realDonaldTrump let @C_C_Krebs go. The SolarWinds hack happened in the March-June update. https://t.co/Z3AsZCG33u pic.twitter.com/2DCGItVPZa 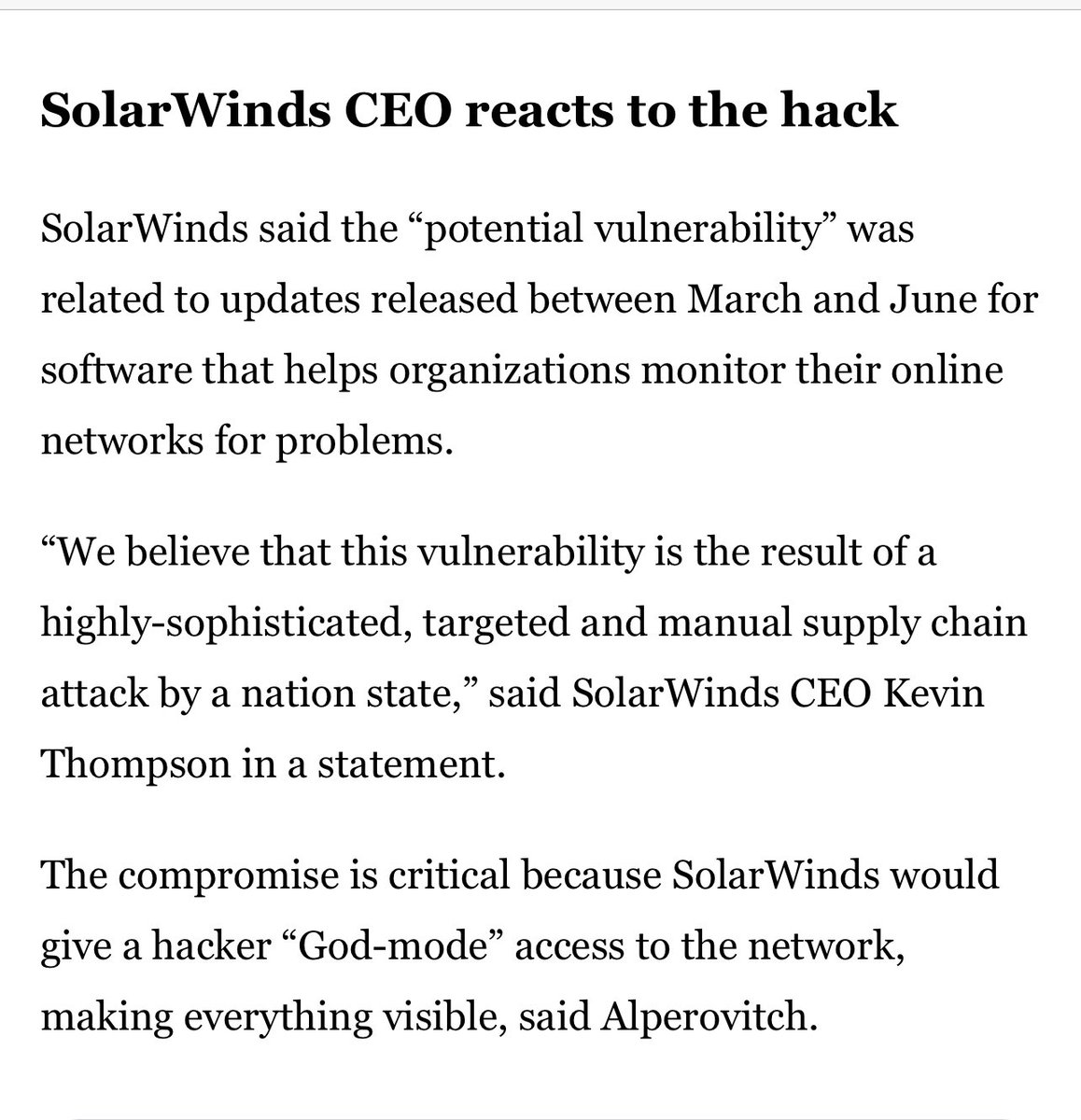 This means the US SolarWinds product is 💯 compromised across the USG. Likely China w/ back doors to every dept, agency & activity in the USG. Not good. @realDonaldTrump this is a grave natl scty threat, esp at this moment. Demand answers ASAP! Know you will. https://t.co/SxxUsoLvFP

The MSM is going to try to connect this to Russia,  Crowdstrike is commenting on the breach.

Be warned that it’s coming and will be blamed on Trump `colluding again with Russia’ because the vigilante sites pretended to be run by US based Trump supporters. One gave an address in Georgia USA. However, the “Russian fingerprints” were beyond blatant. Note: dcleaks similar. pic.twitter.com/AvIpjwA9GB

Some gave addresses in Russia and most had https://t.co/jp4FGKnfrU emails. The HTML contained a Russian language IP logger and their Parler account put their IP in posts: 2.56.242.22 is justhost[.ru] in Moscow. Yes. Moscow.https://t.co/EIL58EbLRe pic.twitter.com/FzHSgC715q

Where have we seen this before? Vigilate websites run by folks that want us to think Russia is attacking?: Ukraine. It’s inspired by the sinister: https://t.co/DFdatqaCml a/k/a “The Peacemaker.” It also invited people to dox “criminal pro-Russian Terrorists.” Compare the two: pic.twitter.com/5FQmSOteYy

By noon EST today, the CISA will know which US govt agencies were affected by the SolarWinds vulnerability.
CISA reporting to the DNI will allow the DNI to give Trump emergency powers as per his 2018EO.
The first domino has fallen and everything is in motion now.

Dec 18 is the *final day* for DNI to issue the 2018EO report to Trump’s team. The report could have already been issued…

The timing of today’s SolarWinds hack that affects nearly the entire US govt is quite interesting.

Paving the way for an announcement?

If this was a large scale cyber attack on the US Governemnt does this open the door for Trump to initiate 2018 EO 13848  “Imposing Certain Sanctions in the Event of Foreign Interference in a United States Election.”

Remember this is information warfare, they do not want people speaking to each other

What have   Grenell, Ratcliffe & Pompeo been warning about, China . When did they leak out China influence on business, governments etc, on the eve of the electoral college vote. Trump has been warning these people, when Q says they have it all, it means they have it all, Trump is giving them a chance to do the right thing. Once they cross the line of knowingly conspiring with a foreign government to manipulate the US election it is game over.

At this point @realDonaldTrump should declassify everything. Everything.

I have been doing this. I agree! https://t.co/1YTTGwxlxx

To Repeat: Did FISA warrants issued to surveil for foreign election interference uncover & record 2020 election fraud activities by foreign entities & Americans? Could American elected officials themselves be snared & this is their final pre-certification warning thread? https://t.co/JADHGGjWuB