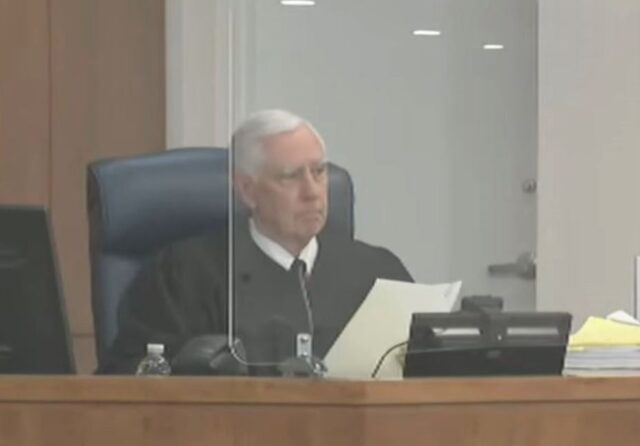 While the Judge said he considered the totality of the evidence, he rejected “hearsay” affidavits as evidence. Since so much of the proof was through a written record, this essentially gutted the case.

On December 3, 2012, Judge James T. Russell of the Nevada First Judicial District Court heard arguments on the motion to dismiss the challenge to the election results brought by Trump electors, Law v. Whitmer.

The hearing was not an evidentiary hearing, but a motion to dismiss that complaint as being inadequate. But unlike a normal case, apparently a lot of evidence in the form of affidavits and deposition transcripts had been submitted to the court, so it was more than a legal argument.

I watched much, but not all, of the argument as it happened:

The Judge just issued his decision, and dismissed the case. You can read it here.

The parties were directed at the end of the December 3 argument to submit their proposed findings of fact and conclusions of law by 10 a.m. this morning. I’ve not seen those documents, but when a court asks litigants to do that, it’s understood that the court is likely to do some serious cutting and pasting from those proposals into a decision. So some portion of the judge’s decision likely adopts proposed findings from one of the parties (given the result, likely the party opposing the contest).

I’ll provide only brief excerpts. Note, the formatting is really messed up because the line numbers to the left are in the court original – it makes it somewhat hard to read and screws up the alignment, with the end of some sentences wrapping to the next line. But would take too long to remove and reformat. I’m going to put my commentary in larger font.

First, the Court summarized the prior proceedings, including the evidence submitted to the court on December 2:

24 seeking an order from this Court either declaring President Donald Trump the winner in Nevada
25 and certifying Contestants as the State’s duly elected presidential electors, or holding that
26 President-elect Joe Biden’ s victory “be declared null and void” and that the November 3 election
27 “be annulled and that no candidate for elector for the office of President of the United States of
1 America be certified from the State of Nevada.” Statement of Contest of the Nov. 3, 2020
2 Presidential Election 20. In orders dated November 19 and 24, 2020, this Court expanded the
3 depositions available to each party from 10 to 15 and shortened the time for notice from seven
4 days to 48 hours. The parties submitted their evidence to the Court on Wednesday, December 2,
5 2020. Defendants submitted the testimony by deposition of four witnesses and Contestants
6 submitted the testimony by deposition of eight witnesses along with numerous declarations,
7 affidavits, and other documents. The Court held a hearing on December 3, 2020.

The court then went through how the “Agilis” signature matching machines and Dominion in-person voting machines operated, finding proper testing and no irregularity in operation.

6 B. Certification and Auditing
7 33. These voting systems are subject to extensive testing and certification before each
8 election and are audited after each election. Thorley Dep. 35:12-39:23; Gloria Dep. 31 :3-32:7,
9 33:9-21.
IO 34. For example, the electronic voting systems used by Clark County were certified by
11 the federal government when they were first brought on the market, as well as any time a hardware
12 or software component is upgraded. This certification is done by a voting system test laboratory.
13 Thorley Dep. 36:19-37:12.
14 35. The electronic voting machines are also tested and certified by the Secretary, who
15 contracts with the Nevada Gaming Control Board for this certification. Thorley Dep. 37: 17-38:21.
16 36. Clark County’s electronic voting machines were last inspected by the Gaming
17 Control Board in December 2019 and certified by the Secretary shortly thereafter. Thorley Dep.
18 39:6-15; GloriaDep. 31 :3-32:7.
19 3 7. The voting machines are also audited against a paper trail that is generated, as
20 discussed above, when voters make their selections. A Clark County voting machine will not
21 operate unless it is connected to a printer (the VVPAT), which creates a paper record that voters
22 can review. Thorley Dep. 28:11-29:6; Gloria Dep. 28:13-29:5.
23 38. After each election, Clark County, like Nevada’s other counties, conducts a random
24 audit of its voting machines. Specifically, it compares the paper trail created by the printer against
25 the results recorded by the voting machine to ensure they match. Thorley Dep. 35: 12-36: 12; Gloria
26 Dep. 33:9-21.

1 39. If there are any issues with or discrepancies in the data recorded by Clark’s voting
2 machines, or issues with the accuracy of the paper trail created by the printers, then they would
3 appear in this audit; indeed, that is what the audit is designed to catch. Thorley Dep. 36:8-12.
4 40. Clark County conducted this audit following the November election and there were
5 no discrepancies between the paper audit trail created by the printer and the data from the voting
6 machine. Gloria Dep. 33:9-21.

The court then went through prior litigations in which such machines were challenged unsuccessfully. The court then considered the totality of the evidence, even though affidavits technically were not admissible:

1 57. Much of Contestants’ evidence consists of non-deposition evidence in the form of
2 witness declarations. These declarations fall outside the scope of the contest statute, which
3 provides that election contests “shall be tried and submitted so far as may be possible upon
4 depositions and written or oral argument as the court may order.” NRS 293.415. The reason for
5 this is to allow for the cross-examination of the deponent under oath.
6 58. These declarations also constitute hearsay, as they are out-of-court statements
7 offered in evidence to prove the truth of the matters asserted. See NRS 51.035, 51.065; Cramer v.
8 State, 126 Nev. 388,392,240 P.3d 8, 11 (2010) (“An affidavit is generally inadmissible hearsay.”).
9 Most of these declarations were self-serving statements oflittle or no evidentiary value.
10 59. The Court nonetheless considers the totality of the evidence provided by
11 Contestants in reaching and ruling upon the merits of their claims.

9 E. Ineligible Voters and Double Voting
10 92. Contestants allege that voters were sent and cast multiple ballots and otherwise
11 double voted, that non-Nevada residents cast ballots and those ballots were counted, and that
12 numerous persons arrived to vote in-person on election day only to find out that a mail ballots was
13 cast in their name already.
14 93. The record does not support a finding that any Nevada voter voted twice. See Doe
15 4 Dep. 10:6-13 (testifying that two voters he checked in were not allowed to vote because of record
16 that they already voted).
17 94. The record does not support a finding that any individuals were sent and cast
18 multiple mail ballots. Cf Negrete Deel. (LAW 001626) (hearsay declaration alleging that she
19 received two ballots, one each for her married and maiden names, but not that she or anyone else
20 cast multiple votes); Finley Deel. (LAW 004944) (hearsay declaration alleging that voter received
21 two ballots, but providing no evidence that ballot was cast or counted).
22 95. The record does not support a finding that numerous voters arrived to vote at their
23 respective polling places only to be informed that a mail ballot had already been received on their
24 behalf when, in fact, the voter had not submitted a mail ballot. Cf Doe 3 Dep. 36:18-25, 37:1-18
25 (testifying that single unidentified man arrived at her polling place and claimed that he did not cast
26 mail ballot allegedly received by election officials,, but not providing any corroborating evidence);

1 Doe 4 Dep. 10:6-13 (testifying that two voters he checked in were not allowed to vote because of
2 record that they already voted, but not demonstrating whether these voters had in fact cast ballots).
3 96. The record does not support a finding that election officials counted mail ballots
4 from voters who also voted in other states. Cj Doe 2 Dep. 56: 15-25 (testifying that she saw ballots
5 arrive from out of state but admitting that she did not know whether they were lawfully cast); Doe
6 3 Dep. 12:8-16 (testifying that she was asked to accept a voter’s California identification with
7 Nevada address and was instructed to give them a provisional ballot, but not that voter had also
8 voted in California).
9 97. The record does not support a finding that election officials counted ballots from
10 voters who did not meet Nevada residency requirements. Cj Doe 2 Dep. 56:15-25 (testifying that
11 voters were allowed to cast ballots without presenting identification, but not that voters did not
12 meet residency requirements); Doe 4 Dep. 10:14–11:12, 40:7-23 (testifying to belief that
13 individuals with out-of-state identification were allowed to vote, but admitting that he did not know
14 if these individuals voted after they were directed to team leaders); Linda Smith Deel. (LAW
15 004650) (hearsay declaration describing voters arriving with out-of-state license plates, but not
16 claiming that these voters were ineligible to vote in Nevada);see Thorley Dep. 47:1-48:12
17 (testifying that Nevada directs the USPS not to forward ballots and that ballots are mailed as
18 marketing mail, which does not include mail forwarding, a feature that requires additional
19 payment).

As can be seen above, and throughout the decision, while the Judge said he considered the totality of the evidence, he rejected “hearsay” affidavits as evidence. Since so much of the proof was through a written record, this essentially gutted the case.

The Judge also rejected the expert testimony offered by the contestants:

120. As reflected herein, the Court finds that the expert testimony provided by
26 Contestants was of little to no value. The Court did not exclude consideration of this evidence,
27 which it could have, but gave it very little weight.

The court then went through the burdens of proof, and found that the contestants didn’t meet the burden of demonstrating anything that would justify a finding of impropriety. This sentence is being widely quoted in news coverage and on social media:

In the end, the Contestants faced an insurmountable obstacle – the calendar. They relied upon documentary evidence and affidavits that the court dismissed as hearsay, but there would not have been time to bring all that evidence in through witnesses. It would be multi-month trial. It’s a problem I’ve pointed out faced by the litigants and attorneys in all of the cases.