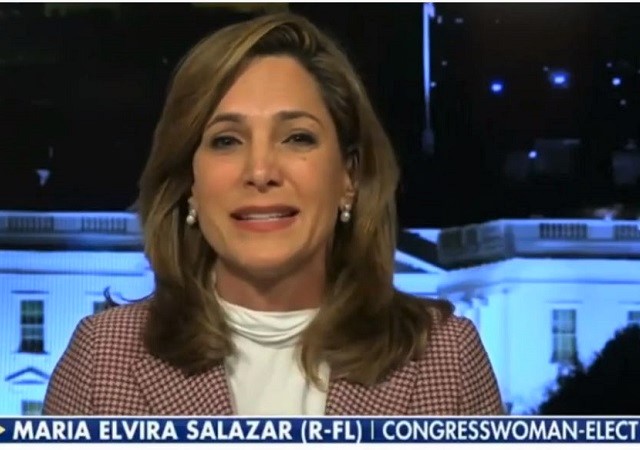 “When I hear this Democratic socialism that is being presented within the Democratic Party, I can only tell you that only brings misery, oppression and exile. And how do I know? Because I have lived it and I have covered it,” Florida Congresswoman-elect Maria Elvira Salazar said.

Not only did Republicans make big gains in the U.S. House on Election Day, but among those elected are men and women whose families fled communist and socialist countries and came to America to build better lives.

Nicole Malliotakis (NY-11) is the daughter of Greek and Cuban immigrants. Maria Elvira Salazar’s (FL-27) parents were Cuban exiles. Carlos Gimenez (FL-26) was born in Cuba and his family emigrated to America in 1960 after the Cuban Revolution. Gimenez’s father Carlos Gimenez, Sr., who was 98, passed away just days after his son was elected. Victoria Spartz (IN-5) was born in what was at the time known as the Ukrainian Soviet Socialist Republic. She emigrated to the U.S. in 2000.

I was born in Miami — a community built by survivors

we can’t just let the socialist left destroy the American Dream for our children!

A natural alliance has formed among the new members of Congress whose families fled socialism or communism to achieve the American Dream. Our group doesn’t gave a name but we have a message to share with America. @MaElviraSalazar @CarlosGimenezFL @Victoria_Spartz pic.twitter.com/JJJ7UYY61l

Move over AOC, meet @NMalliotakis, a descendent of Cuban immigrants who experienced the dangers of communism and socialism up-close, who has started the Freedom Squad. Joining her are @CarlosGimenezFL , @MaElviraSalazar, & @Victoria_Spartz. We welcome the Freedom Squad to DC! 🇺🇸

All four of them emphasized the dangers of socialism and communism during their respective campaigns and, post-election, have continued to stress how the Democrat party’s growing socialist wing will take America down a dark path if allowed to push forward unimpeded.

“The whole issue of socialism and communism, the extremism of my opponent and many members of the Democrat Party gave us the victory,” Gimenez told Fox & Friends after he was elected.

In an interview with NBC News, Salazar said that “When I hear this Democratic socialism that is being presented within the Democratic Party, I can only tell you that only brings misery, oppression and exile. And how do I know? Because I have lived it and I have covered it.”

Malliotakis explained to Fox News in no uncertain terms how critical it was that the most outspoken Republican “messengers” against socialism and communism be people whose families understood most what it was like to live under it:

“But I can tell you that this is important because it is the messenger,” she added. “You have AOC and the socialist squad, now we have individuals who come from very diverse backgrounds — many of whom fled communism or socialism themselves or are like me, a daughter of a Cuban refugee — to be those messengers to say why socialism is bad and to push back and to make sure that we fight to preserve our freedoms and liberties and we reopen our economy, we keep the capitalist system that provides jobs and opportunity.”

Spartz, too, has been vocal in speaking out against Democrat efforts to turn this country into a socialist nightmare:

“I grew up in a socialistic country, the Socialist Republic of Ukraine. I saw what happens when it runs out of money and it is not pretty,” Spartz said.

“And now, I came to America 20 years ago with a suitcase after meeting my husband on a train in Europe. He’s a raised and born Hoosier. And now we’re building socialism. I’m kind of going full circles. I can tell you what is going to be next. It’s very sad for me to see that.”

Watch some of the interviews they’ve done since the election in which they talk about the importance of pushing back against the extremism of the Democratic Party:

THE ‘ANTI-SQUAD’: @NMalliotakis says “we are united by our love for America, for freedom, of liberty, we want to preserve the American dream for future generations.” [with @JohnFBachman on Newsmax TV: https://t.co/VlT7z8drtO] pic.twitter.com/lKKHY3Utdm

Thanks to @foxandfriends and @ainsleyearhardt for having me this morning to talk about the diverse GOP freshman class and the importance of choosing freedom and prosperity over government control. pic.twitter.com/B3rxojJgs7

The majority of America lies in the middle – either center-right or center-left. We need to stop the bickering between the parties and move forward to do the things we need to do to make America better. This is what I’ll bring to D.C. Check out my full interview here: pic.twitter.com/4r7pvpp33w

Judging by what Democrats have said in the aftermath of their losses in the House, the “Freedom Force” is going to be a big nightmare for them. Democrats know that Republicans discussing the party’s embrace of socialism hurt them in competitive races.

Democrats also know that the more diverse faces Republicans have representing the party at all levels of government, the less influence and sway the left will have with minority communities that have been crucial voting blocs for Democrats for decades. They’ll have to argue in the arena of ideas rather than rely on identity politics to carry them through, and that scares the hell out of them.

“Defund police, open borders, socialism — it’s killing us,” Democratic Rep. Vicente Gonzalez (TX-15) told the New York Times. “I had to fight to explain all that.”

If the “Freedom Force” and the Republican allies they’ll have in Congress have anything to say about it, those fights will become even more difficult to win, both legislatively and in the 2022 Congressional elections where the GOP hopes to retake the majority.

— Stacey Matthews has also written under the pseudonym “Sister Toldjah” and can be reached via Twitter. —