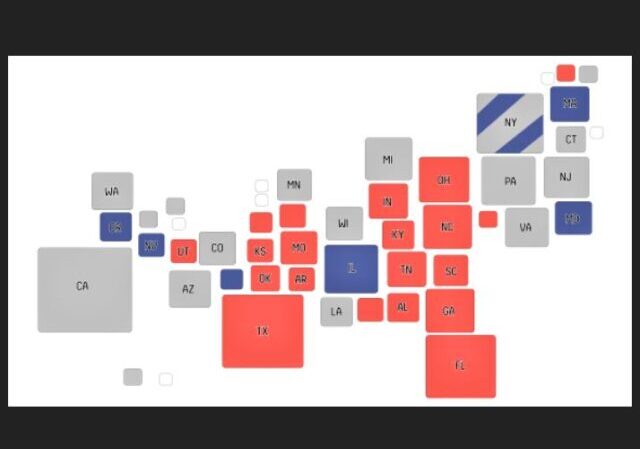 As the Democratic Party engages in a highly amusing circular firing squad over their shock loss of so many House seats, the impact of Republican gains at the state level doesn’t seem to have fully dawned on them.  Or if it has, they are doing what they do best, kicking that particular can down the road, a decade down the road.

Over at FiveThirtyEight, where they appear of late to be better at Monday morning quarterbacking than at analyzing polls and predicting election outcomes, they have an interesting follow-up on the enormous gains Republicans made at the state level and how that will impact redistricting.

Republicans won almost every election where redistricting was at stake. https://t.co/D1gJnTfzaO

Republicans are set to control the redistricting of 188 congressional seats — or 43% of the entire U.S. House.

Democrats will control the redistricting of, at most, 73 seats, or 17%. https://t.co/D1gJnTxa2m

Here are the key 2020 races noted by FiveThirtyEight post-election:

Every 10 years, after the census, congressional and state legislature districts are redrawn to account for population changes. This gives whoever is drawing the maps the power to maximize the number of districts that favor their party — a tactic known as gerrymandering. And as we wrote last month, the 2020 election represented the last chance for voters to weigh in on who would draw those maps. Both parties went into the election with a chance to draw more congressional districts than the other, but the end result was just about the best-case scenario for Republicans. As the map below shows, Republicans are set to control the redistricting of 188 congressional seats — or 43 percent of the entire House of Representatives. By contrast, Democrats will control the redistricting of, at most, 73 seats, or 17 percent.

How did Republicans pull that off? By winning almost every 2020 election in which control of redistricting was at stake:

Democrats are apparently preparing to fight and are (suddenly) interested in “fair maps” and “an actual battle of ideas.”

Democrats may have won the presidency, but they failed to fulfill one of their biggest hopes of this election cycle: taking control of state legislatures and the power to draw electoral districts.

Now, organizers and party officials said, they will be forced to bank on litigation, friendly state courts, Democratic governors, recent state reforms and a growing grassroots movement to hold the line against their fears of Republican gerrymandering — embedding a political advantage in the drawing of electoral maps.

“Let’s have fair maps. Let’s have an actual battle of ideas,” said Patrick Rodenbush, communications director of the National Democratic Redistricting Committee. “Republicans are afraid of the voters they say they want to represent, and they are cheating the American people out of representation by doing this.”

If President Trump is unsuccessful in demonstrating his victory in this year’s presidential election, it will be interesting to watch how the GOP responds to this absolute garbage from Democrats.

Democrats interested in “an actual battle of ideas”? The same Democrats who are actively engaged in cancel culture, in the suppression of conservative ideas (and speech), and in the general shutuppery they and their social/media comrades employ when it comes to anyone who disagrees with their increasingly radical worldview and agenda?  Absolutely laughable.

Will Republicans remember what has happened for the past four years: how Democrats behaved going after the president relentlessly, showing their true colors in their treatment of now-Justice Kavanaugh, and actively planning to pack the Supreme Court, add new states, and eliminate the Senate filibuster to force through their horrific agenda? Or will they take a knee to Democrats’ transparently phony pleas for “fairness” and “an actual battle of ideas”?

One thing seems certain, President Trump’s more than 73 million voters will not accept the latter course . . . whether he’s in the White House or not.