We are quickly moving towards two internet universes, one controlled by liberal and leftist tech giants, the other controlled by upstart conservative services providing a refuge for deplatformed, demonetized, and throttled conservatives.

This emerging decoupling is wholly a product of deplatforming of non-leftists at Facebook, Twitter, and elsewhere. We recently covered how WordPress.com cut off The Conservative Treehouse while Mailchimp cut off the Northern Virginia Tea Party. We covered the development in Prepare for the Great Decoupling – Deplatforming moves downstream to WordPress.com and Mailchimp.

Demonitization is a subset of deplatforming, a way to deprive creators of an income stream from a platform.

Dan Bongino is a big name in emerging conservative media, and a longtime friend of Legal Insurrection. We covered his political races dating back to 2012 from his earlier life, and have watched as his media career took off with his podcast, Bongino.com, The Bongino Report, and regular appearances on Fox News.

Politico ran a hit piece this morning about Dan, portraying him as someone who burst on the scene by peddling post-election conspiracy theories, Dan Bongino leads the MAGA field in stolen-election messaging.

Only ignorant or malisiouc liberal journalists could not know that Dan’s star has been rising for years, particularly this year. To attribute his success to post-election posturing is deceptive and false. But I suspected something else was up regarding the focus of the Politico article on election contests — that is an excuse being used by social media giants to ban or restrict many people who question how the election was conducted and the vote count.

Maybe it was coincidence, but today Dan also revealed that Dan and his entities have been demonetized by Outbrain, a large online advertising system which allows publishers to place links to their articles on other websites. When you see boxed links to articles at other websites, it’s usually advertising and Outbrain is one of the largest players.

The tech tyrants strike again. They’re doubling down on their war on speech. Here’s an email from the tyrants at .
@Outbrain who canceled services on our websites for spurious reasons.If you’re running a conservative website, you’ve been warned about Outbrain.More on my show today

The tech tyrants strike again. They’re doubling down on their war on speech. Here’s an email from the tyrants at .@Outbrain who canceled services on our websites for spurious reasons.If you’re running a conservative website, you’ve been warned about Outbrain.More on my show today pic.twitter.com/RL0kynai8F

Outbrain is a platform that publishers can use to display ads on their websites – including this one… formally.

This morning Dan got an email from Outbrain, informing us that they’d no longer be allowing us to use their platform. “It has come to our attention that some of the content on one or more of the domains associated with your account are in violation of the terms of our agreement” Outbrain says, without specifying what was violated.

Bizarrely, this email comes from their “anti-fraud team”…. who allege no fraud….

While we have [no[ idea whatsoever what content of ours supposedly violated their terms of service, and we can only speculate that it’s for purely ideological reasons, it would be yet the millionth time this has happened to conservatives.

Outbrain is free to clarify what policy was violated – though it’s a bit odd they didn’t do so in the first place.

Coincidence that this came as Politico tried to marginalize Dan? Do you believe in coincidences?

It appears that questioning Joe Biden’s “victory” is now grounds to get you banned on the ground of undermining trust in elections. 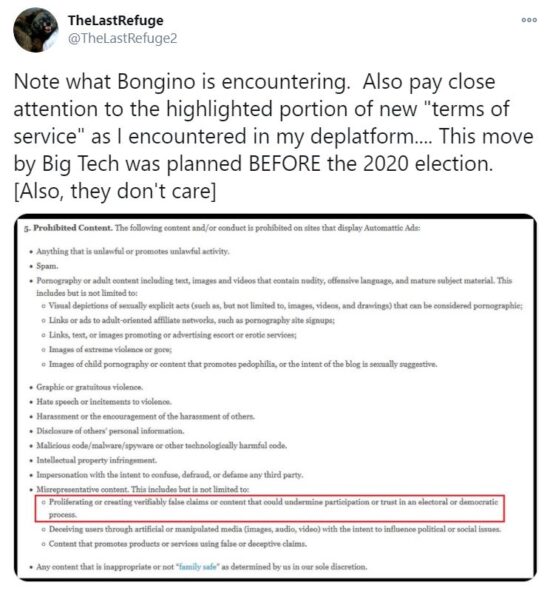 Under that standard, almost every major Democrat and leftist Twitter account should be banned for undermining trust in Trump’s 2016 election. But of course, that’s not how it works.