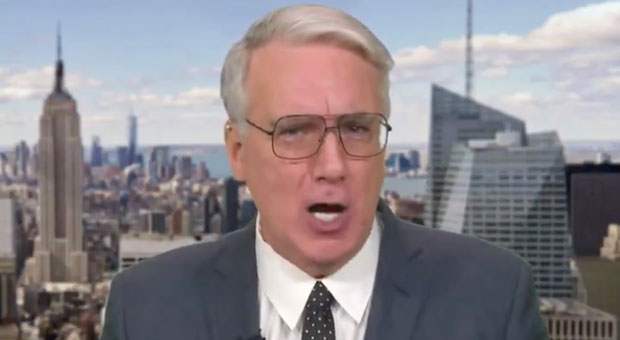 Keith Olbermann demands that Trump supporters are ‘removed from our society’

Sports broadcaster-turned-far-left pundit Keith Olbermann has gone on an unhinged rant where he demanded that President Donald Trump and his supporters are “prosecuted and convicted and removed from our society.”

During a recent segment on his show, Olbermann called the president a “terrorist” and said his “enablers” must be “removed from our society.”

Olbermann told his audience on Thursday that the battle must continue far beyond Election Day.

He called for President Trump and those who support his campaign to be “prosecuted and convicted.”

On Tuesday, Olbermann announced he is leaving ESPN amicably in order to launch his new political show in the hope of impacting the upcoming election.

Olbermann went on an anti-Trump tirade during his second show that aired Thursday.

He declared that “Trump can be, and must be, expunged.

“The hate he has triggered, Pandora’s boxes he has opened, they will not be so easily destroyed.”

“So, let us brace ourselves,” he continued.

“The task is two-fold: the terrorist Trump must be defeated, must be destroyed, must be devoured at the ballot box, and then he, and his enablers, and his supporters, and his collaborators, and the Mike Lees and the William Barrs, and Sean Hannitys, and the Mike Pences, and the Rudy Gullianis and the Kyle Rittenhouses and the Amy Coney Barretts must be prosecuted and convicted and removed from our society while we try to rebuild it and to rebuild the world Trump has destroyed by turning it over to a virus.”

Olbermann did not reveal which alleged crimes Trump and his supporters “must” be prosecuted for.

“Remember it, even as we dream for a return to reality and safety and the country for which our forefathers died, that the fight is not just to win the election, but to win it by enough to chase — at least for a moment — Trump and the maggots off the stage and then try to clean up what they left,” Olbermann continued.

“Remember it, even though to remember it, means remembering that the fight does not end on November 3rd, but in many ways, will only begin that day,” he added.

Remove ACB fr society. @KeithOlberman in YouTube rant: “Trump can be and must be expunged….His enablers…the Mike Lee’s, the William Barr’s and the Sean Hannity’s and the Mike Pence’s…and the Amy Coney Barrett’s must be prosecuted and convicted and removed from our society” pic.twitter.com/jC0AgOhAMU

During an Tuesday interview with The Washington Post, the newspaper reported that Olbermann said “that he had been watching cable news during the Trump era and concluded there was room, even a necessity, for a stronger anti-Trump voice — a claim that might leave viewers of MSNBC and CNN furrowing their brows.”

The Post quoted Olbermann as saying: “As good as the hands-on reporting is, as good as they are at ferreting out and describing what’s wrong, I see the cable and broadcast networks still hesitant to say, ‘That’s a lie’ or, ‘This is disloyal to the Constitution’ or, ‘This is an attempt to establish the preface to a dictatorship — or at least authoritarianism.’”

So, Olbermann apparently believes that he will be able to contribute more to defeat Trump than left-leaning mainstream outlets.

“I think it’s fair to say that conservatives in politics and media know a little bit better what to bring to a knife fight,” he said.

“Liberals — and I’m hearing it from Joe Biden — say, ‘Well, there are Republicans we can work with,’ and I’m like, ‘I can’t hear you; I’m getting the flamethrower ready.’

“I’m going to bring the flamethrower.”