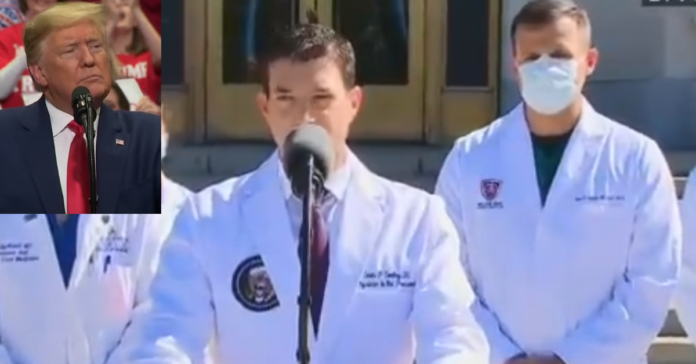 President Trump’s doctors gave America an update on his condition today and it was good news.

White House physician Dr. Sean Conley said Saturday also gave the great news that Trump does not have a fever any longer.

Trump has been reportedly cracking jokes while at Reed told his doctors, “I feel like I could walk out of here today,” they detailed today.

The president has no fever, is not receiving supplemental oxygen and has normal organ function, the doctors said, declining to predict when he might discharged. He will be on a five-day course of an experimental drug treatment, the doctors said.

Conley and a team of doctors briefed reporters at 11 a.m. at the military hospital where the president is being treated for the coronavirus infection.

The president was transported by helicopter to the Walter Reed National Medical Center in Bethesda, Md. on Friday, following a positive coronavirus test late Thursday night.

Trump is experiencing mild symptoms, the White House had previously said, noting that the move to the military hospital was a “precautionary measure” and that the president would continue working from offices located in the facility.

Presidential physician Dr. Conley: “Just 72 hours into the diagnosis” for the president, the medical team is “extremely happy with the progress the president has made.” pic.twitter.com/f7kubmlwjS

“Has he ever been on supplemental oxygen?”

“You keep saying right now. Should we read into the fact he had been previously?

Conley: “Yesterday and today, he was not on oxygen.”

Then again: “He’s not on oxygen right now.” pic.twitter.com/6RDCvDUtc4