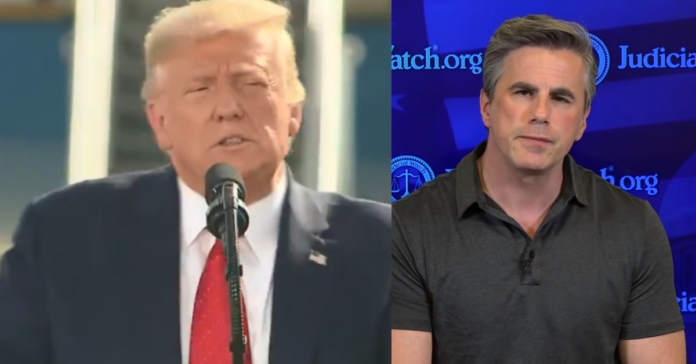 President Trump just gave Judicial Watch’s president Tom Fitton a high honor and named him to a key court oversight agency with the power to remove certain judges for misconduct.

The White House announced today that Trump has named Tom Fitton to the D.C. Commission on Judicial Disabilities and Tenure.

The White House released a statement announcing the move:

“Today, President Donald J. Trump announced his intent to appoint the following individuals to key positions in his Administration:

Laurence Allen Elder, of California, to be a Member of the Commission on the Social Status of Black Men and Boys.

Loren Robert Flaum, of New York, to be a Member of the United States Holocaust Memorial Council.

Bill H. Stern, of South Carolina, to be a Member of the United States Holocaust Memorial Council.”

Thank you, President @RealDonaldTrump, for moving to appoint me to the DC Commission on Judicial Disabilities and Tenure. I am honored and humbled by your confidence. Now, please get well soon! https://t.co/u0fqNUur0O

What an honor. Thank you, @realDonaldTrump.

Very proud of my husband for his tireless dedication to his family and country.