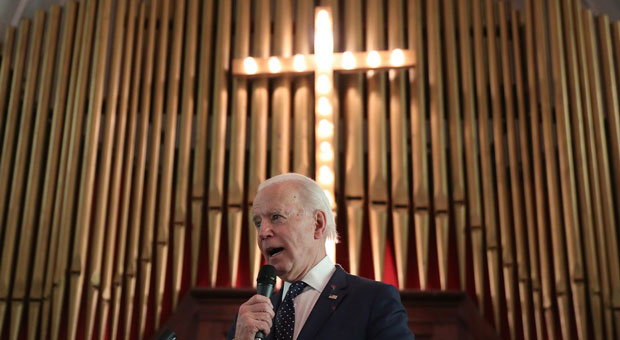 The former vice president is releasing the 7-figure ad buy this month in an effort to convince Christians that Biden and his running mate, Sen. Kamala Harris (D-CA), are the “the clear moral choice” in the election.

Biden’s campaign is heavily investing financial resources in an attempt to win over Americans of faith at the same time the Democratic Party is pushing far-left policies that conflict with religious values.

Democrats have embraced the radical position of access to abortion at any time during pregnancy – an insistence the party has no room for pro-life individuals or candidates.

“We are running these ads to highlight to faith-motivated voters that Joe Biden is the clear moral choice in this election,” Biden’s campaign faith engagement director, Josh Dickson, told

“Religious voters matter to this campaign and are a key part of our broad, diverse, and robust coalition,” Dickson added.

That message is at odds, however, with the Democratic National Committee and its chairman Tom Perez.

According to Breitbart, Perez said in 2017 there is no room in the Democrat Party for pro-life individuals, most of whom are people of faith.

“Every Democrat, like every American, should support a woman’s right to make her own choices about her body and her health,” Perez said, as HuffPost reported.

“That is not negotiable and should not change city by city or state by state.”

In July 2019, Biden revealed his healthcare plan would enshrine Roe v. Wade into the Constitution and force taxpayers to fund abortion.

The Biden campaign said his plan would build on the “progress” of Obamacare’s contraceptive mandate that offers “free preventive care including contraception” by “repealing the Hyde Amendment because health care is a right that should not be dependent on one’s zip code or income.”

After the U.S. Supreme Court ruled in favor of allowing private companies with conscience objections and religious groups, such as the Little Sisters of the Poor, to be exempt from Obamacare’s contraceptive mandate, Biden, who professes to be Catholic, vowed in July to reverse the decision protecting religious conscience exemptions to the mandate.

As Neon Nettle reported in October 2019, Biden was denied communion at a Catholic Church in South Carolina due to his ardent support for abortion on demand.

Rev. Robert E. Morey, the pastor of St. Anthony Catholic Church in Florence, refused to give the Eucharist to Biden during Mass.

National faith-based organizations say the Biden campaign ads, which are scheduled to air on Catholic and Evangelical TV and radio this month, are “deceptive.”

The ads are titled: “Principles,” which features Biden in a conversation with Jesuit editor-in-chief of America magazine Rev. Matt Malone; “Morning,” in which Biden discusses how his faith helped him during the deaths of his first wife and daughter and his son to cancer; and “A Man Guided by Faith,” which features a woman who attends Biden’s parish, insisting he is a “man guided by faith.”

“These ads are one component of our expansive, direct appeal to people of faith that Vice President Biden’s agenda is much more aligned with their common good values than the divisiveness, racism, and fear we see from the current administration,” Dickson said, according to RNS.

CATHOLICS, President Trump has something to say to you! pic.twitter.com/PY2AMcaBMA

Brian Burch, president of CatholicVote, reacted to the ad buy announcement by observing the vast discrepancy between the ads’ message and the reality of Biden’s political views.

“Joe Biden has pledged to gut religious schools, strip away fundamental religious freedoms, and for the first time in American history, force taxpayers to directly pay for abortion.”

Pointing to the former vice president’s “unprecedented assault on the Little Sisters of the Poor” he vowed to undertake if elected, Burch said CatholicVote’s “Biden Report for Catholic Voters” documents “his decades-long anti-life and anti-faith record and policy agenda.”

“Both Biden and Harris have made clear they will prioritize the agenda of Bernie Sanders and AOC [Alexandria Ocasio-Cortez], and will destroy everything Catholics and all people of faith hold dear,” he asserted.

“Humanists for Biden seek to attract all those who believe in nothing: agnostics, atheists, and the religiously confused,” Donohue wrote.

“They are a growing part of the nation and are heavily populated by young people, and, of course, the learned ones in the professoriate.”

He observed the humanists’ parent group, Secular Democrats of America, has condemned school vouchers, which can be used for children to attend Catholic schools, Catholic hospitals, “where care can be dictated by religious doctrine,” and religious exemptions.

Donohue added the secularists charge that “’Christian Nationalists’ are a threat to democracy”:

What makes Humanists for Biden so troubling is that this organization is being rolled out in the same week that one of Biden’s staffers, Deputy Data Director Nikitha Rai, lashed out at Amy Coney Barrett for holding to biblical teachings on marriage and sexuality.

Michael Warsaw, chairman of the board and chief executive officer of the EWTN Global Catholic Network and publisher of the National Catholic Register, observed Friday that, during the first presidential debate, Biden said, “I am the Democratic Party.”

He questioned what that means for people of faith in America:

But if Biden is “the Democratic Party,” as he stated, then he fully owns the party’s platform, which includes overt support for unrestricted abortion, funding for Planned Parenthood, the repeal of the Mexico City Policy and the Hyde Amendment, the passing of the “Equality Act” and the elimination of religious exemptions that protect employers, medical professionals and others from being forced to violate their deeply held religious principles.

“Does Biden’s embrace of these positions and his embrace by the most secular elements of society bode well for Catholics?” Warsaw further asked:

In a word, No — not if you plan to practice your faith and not just claim it.

If your claim of Catholicism is just the result of your baptism, that is one thing; but if your Catholicism means you are committed to Church teaching, that is something else.

A poll released in September by EWTN/RealClear Opinion Research affirms, in fact, that Catholics cannot be considered a single voting bloc, because those who actively practice the faith often differ substantially in their views from those who only identify as “Catholic.”

The poll showed that Catholics who attend Mass more than once a week decisively support Donald Trump, while those who go to Mass seldom, or never, firmly support Biden.

Penny Nance, CEO and president of Concerned Women for America, reflected on Biden’s vision that America is at a crossroads.

“We agree with Joe Biden that there’s a battle for the soul of America, but unfortunately he’s on the wrong team,” she said.