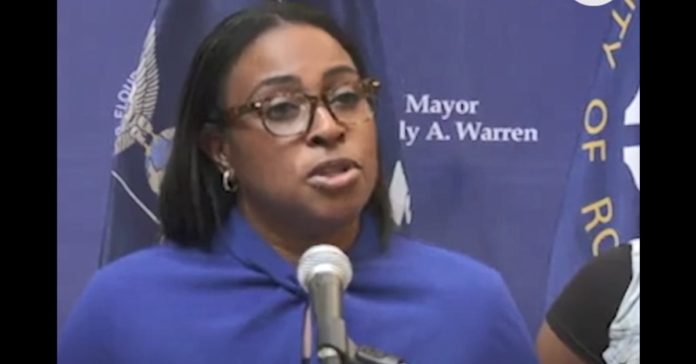 Rochester, N.Y., Mayor Lovely Warren just got some very bad news from a grand jury impaneled to look at her financial misdeeds.

She was indicted Friday on campaign finance charges that came from a probe of her re-election campaign three years ago.

Monroe County District Attorney Sandra Doorley said Warren is facing two felonies. A scheme to defraud in the first degree and a violation of election law.

Also charged were Warren’s campaign treasurer and the treasurer of her PAC.

“This could be a long process and we anticipate that there could be challenges along the way so I don’t think this will be anything resolved quickly,” Doorley told the media.

“We are here to be transparent and upfront with the people of Monroe County,” Doorley said. “We are not here to conduct a trial in the media.”

“Lovely Warren is still the mayor of the city of Rochester and mayoral business needs to continue,” Doorley added. “I don’t want to disrupt that and I want to continue in our community.”

The associates indicted with Warren include Albert Jones Jr., who was Warren’s campaign treasurer, and Rosalind Brooks, who was the treasurer of a political action committee created by Warren called Warren for a Strong Rochester. Brooks, who also goes by Rosalind Brooks-Harris, is the city’s finance director.

They are scheduled to be arraigned on Monday in Monroe County before a Cayuga County judge, who will preside over the case.

The charges were handed up by a grand jury Friday that two weeks ago heard evidence in a case brought by District Attorney Sandra Doorley, who was acting on the recommendation of a scathing state Board of Elections investigation.

That probe concluded in a 35-page report, forwarded to Doorley in March, that, “Considerable evidence supports a finding that Lovely Warren, Albert Jones Jr., Rosalind Brooks … and others engaged in a scheme to evade contribution limits.”