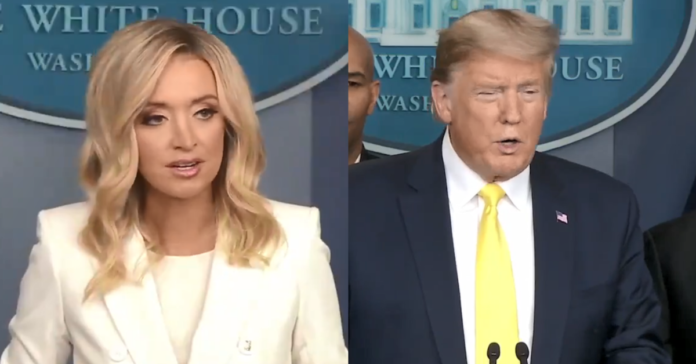 President Trump will be working from his office at Walter Reed National Military Medical Center where he will be spending “the next few days” according to White House press secretary Kayleigh McEnany.

McEnany said in a statement that Trump “remains in good spirits, has mild symptoms, and has been working throughout the day.”

The President, she added, “will be working from the presidential offices at Walter Reed.” Mike Pence has not been sworn in and given temporary presidential powers and there is no expectation that he will need to be any time soon.

Eric Trump tweeted out a message to his father: “@RealDonaldTrump is a true warrior. He will fight through this with the same strength and conviction that he uses to fight for America each and every day.”

He added, “I ask you to join me in praying for his recovery. I have never been more proud of someone and what they have had to endure.”

“President Trump remains in good spirits, has mild symptoms, and has been working throughout the day,” press secretary Kayleigh McEnany said. “Trump will be headed to Walter Reed Medical Center shortly — Out of an abundance of caution, and at the recommendation of his physician and medical experts, the President will be working from the presidential offices at Walter Reed for the next few days. President Trump appreciates the outpouring of support for both he and the First Lady.”

Joe Biden has reportedly pulled all his negative ads for the time being but will still run his positive ads.

Earlier in the afternoon, Trump’s physician wrote in a memo he “remains fatigued but in good spirits.”

“He’s being evaluated by a team of experts, and together we’ll be making recommendations to the President and First Lady in regards to next best steps,” Navy Commander Dr. Sean Conley wrote.

He said Trump had been administered a Regeneron polyclonal antibody cocktail and has been taking zinc, vitamin D, famotidine, melatonin and a daily aspirin.

The memo also said first lady Melania Trump remains well with only a mild cough and headache, and the remainder of the first family is well and have tested negative.

The President disclosed in the early morning hours on Friday that he and the first lady had tested positive for coronavirus.

The development threw the country’s leadership in turmoil and lent new uncertainty to the unfolding presidential race.

Moments before news broke that Trump was heading to Walter Reed, Democratic presidential nominee Joe Biden said he was suspending negative advertising for the time being.

The Gang of Eight — top leaders of Congress and top lawmakers on the House and Senate intelligence committees — have not been briefed on Trump’s health, according to two sources familiar.

The group typically gets briefed on classified intelligence and national security matters, the sources added.

Latest from the WH regarding Trump’s trip to Walter Reed: pic.twitter.com/ePxWNqcX88

Obama extends wishes to Trump & Melania: “It’s important I think for all of us to remember that even when we’re in the midst of big political battles w/issues that have a lot at stake, that we’re all Americans & we’re all human beings & we want to make sure everybody is healthy.” pic.twitter.com/rxlAi0SgJO