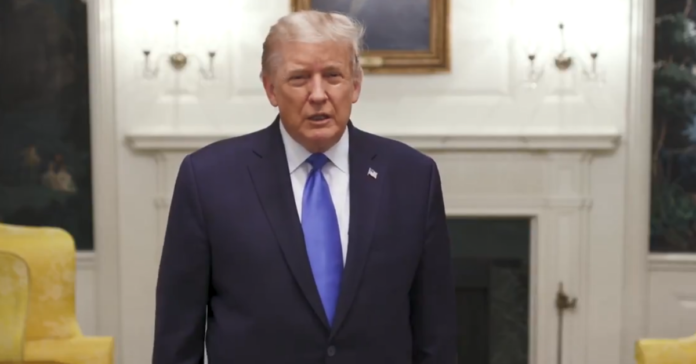 President Trump breaks his silence in a video message where he thanks America for all the support he has received since his positive test result.

He said Melania is doing very well. He said he would never forget the outpouring of support: So Thank you very much, I appreciate it, I will never forget it.”

Trump walked under his own power to Marine One and as you can see by the video below he seems fine and in good spirits.

President Donald Trump is being taken to Walter Reed Medical Center on Friday “out of an abundance of caution” following his coronavirus diagnosis, the White House said.

Trump was seen wearing a mask as he departed the White House shortly after 6:15 p.m. ET and walked toward his helicopter, Marine One. He waved to the press but did not stop for questions.

The move, which appears to mark an escalation in the efforts to treat the president, is being made “as a precautionary measure,” a senior administration official told NBC News.

“President Trump remains in good spirts, has mild symptoms, and has been working throughout the day,” press secretary Kayleigh McEnany said in a statement to reporters at the White House.

“Out of an abundance of caution, and at the recommendation of his physician and medical experts, the President will be working from the presidential offices at Walter Reed for the next few days. President Trump appreciates the outpouring of support for both he and the First Lady,” McEnany said.

After his departure from the White House, the president’s official Twitter account shared a video of him appearing to speak from the Oval Office.

“I want to thank everybody for the tremendous support,” Trump said. “I’m going to Walter Reed hospital, I think I’m doing very well, but we’re going to make sure that things work out. The first lady is doing very well. So thank you very much, I appreciate it, I will never forget it. Thank you.”