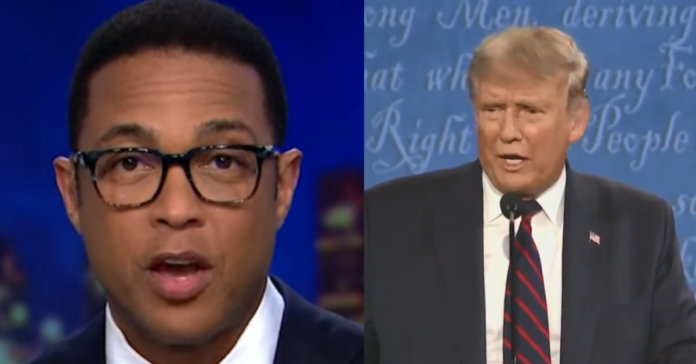 “In large part, it’s his own dereliction is partly to blame for this. He chose to go out to rallies. He chose to downplay masks,” Said Don Lemon trashing President Trump for getting Covid.

“He chose to not social distance and…and call it a hoax…It’s horrible that the President has this, but he chose to handle the situation this way. Was this inevitable?”

Later Lemon said to Dr. Sanjay Gupta in a morbid analysis, “Is this a moment of reckoning for the president and this administration?

“For all of the… all of the pretending or looking the other way and trying to convince people otherwise of the science, for whatever reason — whether it was for, to make sure that he was re-elected –“

“To make sure that he had high standing with the public, or just to — for whatever reason. Because of the economy,” Lemon said continuing trashing Trump.

Lemon added, “Is this now a moment of reckoning that yes, this is real.”

“It is not a hoax. It doesn’t care if you’re a Democrat or a Republican.”

“It is time to take this seriously, and all the preventative measures that the scientists, the doctors, like Dr. Fauci and Dr. Birx, have been touting for so long?”

“And as I understand now, well, what I am trying to understand is how they are going to portray this now.”

“Are they going to continue on with the messaging of the President and carrying the water of the President by downplaying this virus or will they now turn to scientists and not, you know, Dr. Atlas – the Dr. Atlas’s of the world who continue to promote such thing as herd immunity and so on and so forth and to downplay masks.”

“Are we going to hear more from the Faucis and Birx’s of the world rather than the Atlas and the President – President’s wishful thinking of this power?” Lemon asked.