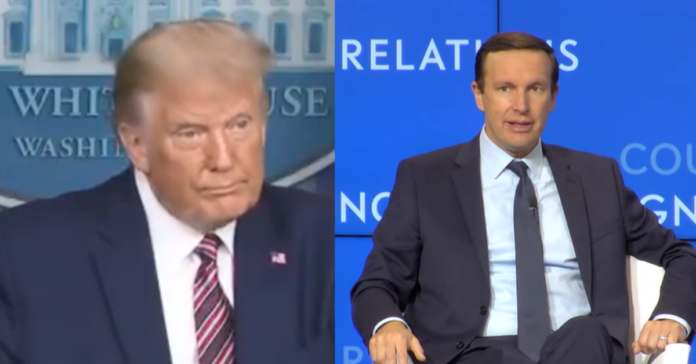 Anchor Jim Sciutto asked, “I want to talk about Russia because yesterday we’re days away from the U.S. election. You tweeted this public comment, and you were briefed on the intelligence here, that there is evidence of a giant, according to you, a multi-year effort to help Trump in 2020 by Russia. What can you tell us about that?”

Murphy said, “Well, what I can tell you is that it’s much bigger and bolder and smarter than it was in 2016.”

“The Russians have learned, and they are now trying to use U.S. persons and fake websites in order to proffer a narrative that helps President Trump’s re-election.”

He added, “I also think that you have to be much more serious about the Russian threat given today’s news.”

“If President Trump can’t be out there on the campaign trail for the next two weeks, then he is going to rely on his surrogates, and, unfortunately, one of his surrogates is Vladimir Putin.”

“So you are likely going to see this campaign ramped up by Russia over the next few weeks to try to substitute for the President’s absence on the campaign trail.”

He went on, “My worry is that the intel agencies are not being clear with the American people about the size of the Russian operation and their clear desire to try to elect President Trump to a second term.”

Concerns regarding foreign election interference have increased in the past few months following an assessment from William Evanina, director of National Counterintelligence and Security Center. Evanina said that Russia, China and Iran are engaging in interference efforts surrounding the elections.

His assessment also detailed that Russia was seeking to influence the election in favor of Trump, while China and Iran preferred the Democratic nominee, former Vice President Joe Biden.

Reporting from former special counsel Robert Mueller found that in 2016, Russia engaged in a sweeping disinformation campaign on social media in order to influence the U.S. election between then-candidate Trump and former Secretary of State Hillary Clinton.

Sen. Murphy (D-CT) just hours after Trump COVID News: “If President Trump can’t be out there on the campaign trail for the next two weeks, then he is going to rely on his surrogates. And unfortunately, one of his surrogates is Vladimir Putin.” https://t.co/jmIG7iC0ga