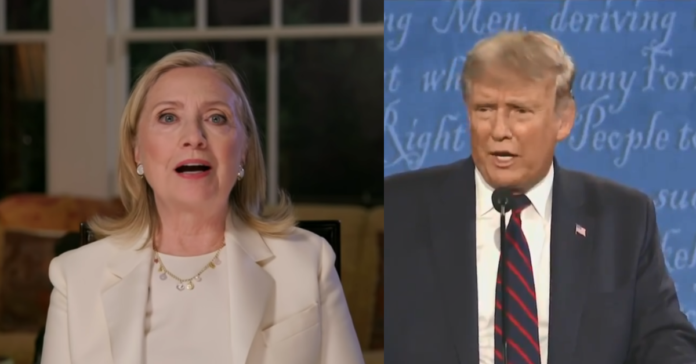 She accused Trump of betraying his oath of office and being disloyal to America: “Donald Trump has demonstrated repeatedly that his first allegiance is not to the United States of America.”

Hillary does not know when to just shut up but she should as most people blame the Clinton’s for many of the failures of the past.

It was the Clinton’s who took the money and turned their back on the Dem base and in that they way made Trump inevitable. Remember too, we have FOIA so we can keep an eye on our leaders, she was the one who was disloyal to that fundamental American right with her email shenanigans.

Clinton made virtually the same remarks during a Tuesday appearance on MSNBC ahead of the first presidential debate between President Trump and Democratic nominee Joe Biden.

“He has demonstrated repeatedly that his first allegiance is not to the United States of America,” Clinton said.

“He has been uncommonly – some might even say, uniquely – beholden to Russia, to Putin. And he has been willing to disregard his own intelligence services, the FBI, and everyone else who has raised legitimate questions about the relationship.”

Clinton’s claims echo wider allegations that have dogged President Trump since the 2016 presidential campaign that he is aiding and abetting – whether knowingly or not – Russia’s attempts to meddle in U.S. politics.

U.S. intelligence agencies have concluded that Russia interfered in the 2016 U.S. presidential election, including hacking Clinton’s campaign, though Moscow has denied the charge.

Donald Trump has demonstrated repeatedly that his first allegiance is not to the United States of America.

Trump isn’t just cheating the government when he dodges taxes.