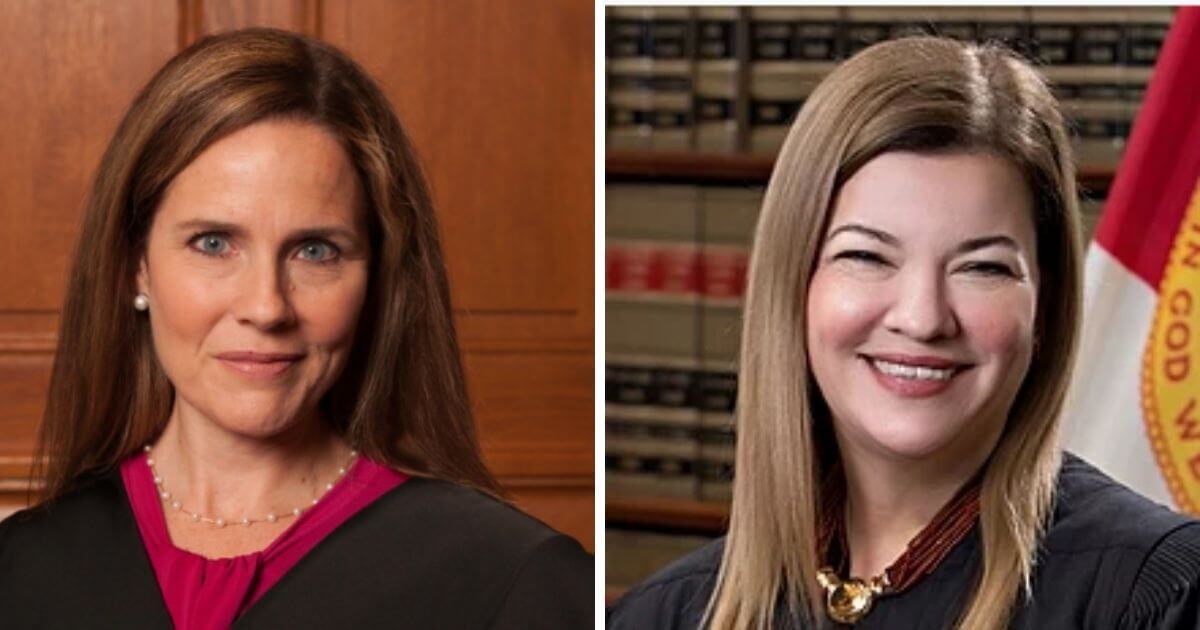 Two women are emerging as the front-runners to replace the late Justice Ruth Ginsburg on the Supreme Court.

There’s not much doubt that President Donald Trump will nominate a replacement. The president on Saturday tweeted his commitment to move forward with a nomination, even as some Republican senators balked at a confirmation process prior to Election Day.

“We were put in this position of power and importance to make decisions for the people who so proudly elected us, the most important of which has long been considered to be the selection of United States Supreme Court Justices. We have this obligation, without delay!” Trump tweeted.

.@GOP We were put in this position of power and importance to make decisions for the people who so proudly elected us, the most important of which has long been considered to be the selection of United States Supreme Court Justices. We have this obligation, without delay!

TRENDING: Adam Schiff Accepts Report from New ‘Whistleblower’ Whom He Accused of Lying to Congress Weeks Ago

According to Reuters,  Trump has “praised” Judge Amy Coney Barrett of the Chicago-based 7th Circuit Court of Appeals and Judge Barbara Lagoa of the Atlanta-based 11th Circuit as possible replacements for Ginsburg.

As of Saturday night, other media outlets were reporting that Barrett and Lagoa were likely picks, reflecting that Trump praised them in response to questions while leaving the White House on Saturday.

Trump: “I will be putting forth a nominee next week. It will be a woman.”

Trump said he would prefer a female pick, according to a White House media pool report.

“If somebody were to ask me now, I would say that a woman would be in first place, yes,” Trump said Saturday. “The choice of a woman, I would say, would certainly be appropriate.”

“I will be putting forth a nominee next week. It will be a woman,” Trump said.

He said Barrett is “very respected.”

When asked about Lagoa, Trump called her an “extraordinary person.”

“I’ve heard incredible things about her. I don’t know her,” he said. “She’s Hispanic and highly respected.”

Trump said of those on his shortlist:

“I’ve gotten to know many of them. From a legal standpoint, from a sophisticated understanding of the law, from a constitutional standpoint I think it’s the greatest list ever assembled. I think that the other side should show their radical left list and you’ll be surprised.”

I reported back in May 2019 that during his deliberations over the Kennedy vacancy, President Trump told confidants he was “I’m saving her [Amy Coney Barrett] for Ginsburg.” She remains the overwhelming favorite in Trump’s inner circle. https://t.co/16QvYTiPVq

According to The Washington Post, Barrett clerked for former Supreme Court Justice Antonin Scalia. Trump appointed Barrett, 48, to her current position in 2017.

She formerly taught at the Notre Dame University Law School, according to Fox News.

Her Catholic faith emerged as a bone of contention during her confirmation.

“The dogma lives loudly within you, and that’s a concern,” Democratic Sen. Dianne Feinstein of California said at the time.

“It’s never appropriate for a judge to impose that judge’s personal convictions, whether they arise from faith or anywhere else, on the law,” Barrett replied, according to Fox.

Barrett was reportedly on Trump’s shortlist in 2018 when he nominated now-Justice Brett Kavanaugh to the court.

A former assistant U.S. attorney for the Southern District of Florida, she also was a district judge on the Florida 3rd District Court of Appeals, according to  ABC.

In its reporting on who might be selected, The Hill noted that Amul Thapar, and Allison Jones Rushing, both judges Trump appointed to their currents posts, are also in the running.

The Hill said that a source it did not name said that Rushing, a former clerk for Justice Clarence Thomas and currently the judge for the 4th Circuit in Richmond, Virginia, is backed by evangelicals and that Thapar, currently serving in the 6th Circuit in Cincinnati, has also been mentioned.