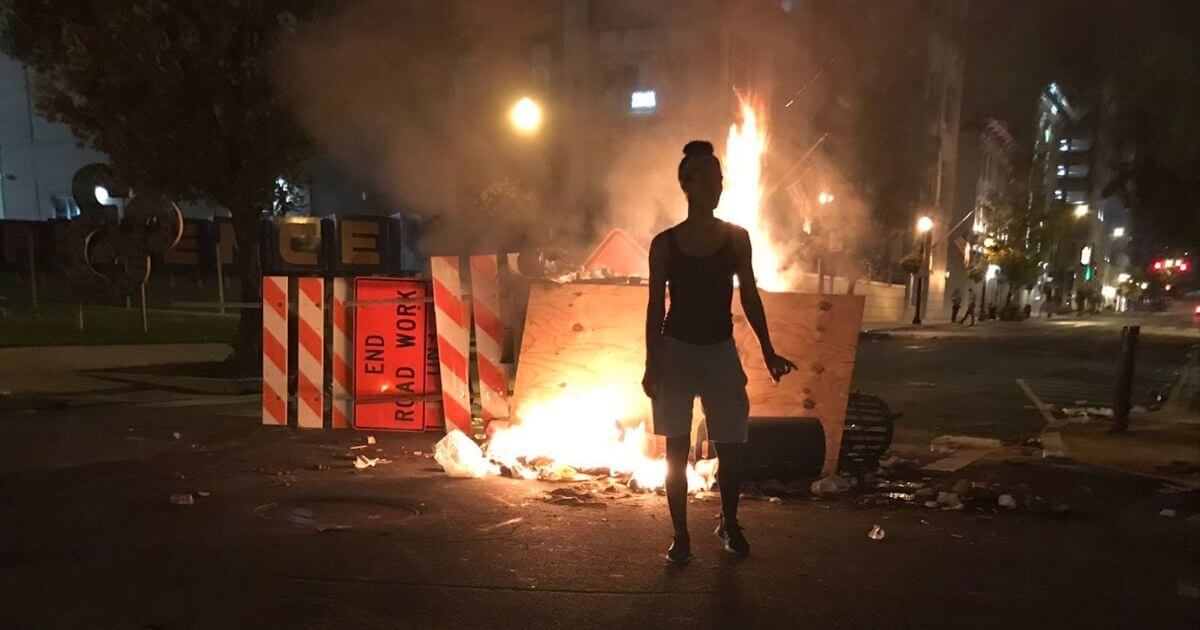 Portland, Oregon — a city besieged by more than three months of deadly and damaging riots — has given leftist demonstrators impunity to set fires and destroy property in order to achieve their political goals.

Given the city’s geographic location in the country and its very, very liberal application of laws, it wouldn’t be a stretch to describe the city as the “wild west.”

In fact, at this juncture, Portland has become synonymous with rioting and other forms of violent civil unrest.

In a consequence-free environment, you’d expect nothing less.

Oregon’s largest city might end up as a case study in the decades to come with regard to what can happen when you allow anarchy to foment in an otherwise peaceful region.

That’s a discussion for a later date.

While Portland’s elected officials have allowed mobs to roam the streets night after night since May, it’s nice to have an unfortunate situation remind us that at least one community still values the principles of a polite society.

In fact, you could go so far as to say that community values the bedrock fundamentals of law and order.

The city of Lancaster, Pennsylvania, was briefly plunged into chaos Sunday and into Monday morning, but local leaders offered a beacon of hope for those who wish to live their lives in relative peace.

Ricardo Munoz, 27, was shot and killed by a Lancaster police officer as he lunged toward the officer with a knife, video of the encounter appears to reveal.

The man’s family would later tell WPMT-TV he suffered from schizophrenia, and that he had been plagued by mental illness throughout his life.

It was a sad conclusion to a human life, but it was a better outcome than a dead police officer.

Whether or not the country’s mental health system failed Munoz is a debate for bureaucrats and social workers.

What is important is that a police officer wasn’t stabbed to death while serving his community.

Sadly, not everyone agreed.

Because Munoz was a person of color, you’d have to assume, protests soon popped up in the city. Despite the fact that the quickly released body camera footage from the officer left little doubt the man appeared manic, and was armed with a knife, those protests devolved into riots:

The Lancaster Police Department issued a news release about the rioting:

“A group in excess of 100 protestors gathered on the access ramp on the west side of the station. The group moved further up the ramp and locked arms in a line. A public address system was used to provide several warnings that if the group did not move from the ramp that chemical munitions would be deployed,” police said.

The New York Post reported that around a dozen people were arrested on charges related to the riot early Monday morning.

So-called protesters were seen throwing anything not bolted down at police officers, and they damaged a police car.

Unfortunately, this has been a familiar scene in the country since Memorial Day, when George Floyd died after a Minneapolis police officer knelt on his neck for nearly nine minutes during an arrest.

But a judge in Lancaster didn’t give the alleged rioters the Portland treatment.

The Post reported Magisterial District Judge Bruce A. Roth threw the book at members of the unruly mob.

On Monday, Roth set bail for nine of those arrested on suspicion of rioting at $1 million per person, while another alleged rioter had his bail set at $100,000.

Lancaster Stands Up, a group which identifies itself on social media as “a grassroots organization fighting for an America that is for all of us,” wasn’t pleased with the high bail amounts.

None of the 10 defendants could afford to get out of jail, according to the Post.

“The absurdly high bail amounts indicate that what we’re seeing is not a measured pursuit of justice, but a politically motivated attack on the movement for police reform and accountability,” the group tweeted.

The absurdly high bail amounts indicate that what we’re seeing is not a measured pursuit of justice, but a politically motivated attack on the movement for police reform and accountability.

But in a plot twist that shouldn’t shock a single person on this planet, the demonstrators returned Monday night, and according to PennLive, they actually remained peaceful.

It’s almost as if the threat of punishment worked as a deterrent, helping to prevent another round of property damage, which could have eventually led to endless rioting and deaths.

Unlike Portland’s blanket amnesty for most rioting charges, which freed a man who later allegedly hunted down and killed a conservative — only to later die in a confrontation with law enforcement — Judge Roth fast-forwarded through potentially never-ending chaos and sent a message.

That message is quite clear: Rioting is illegal.

The Pennsylvania judge didn’t buck a trend, or go above and beyond the duties of his bench. He simply applied existing laws meant to protect people and property from mobs.

The result is that people who apparently wanted to use a police officer’s act of self-defense against an armed man as a pretext to destroy things decided that one night of anarchy was enough.

The situation in Lancaster is under control, and the city’s citizens are safe.

The remedy for rioting, it appears, is applying the law to people who are suspected of engaging in rioting.

Perhaps Portland’s leaders, if they cared about their citizens more than they valued virtue signaling, could restore order to their city by simply following Lancaster’s blueprint.