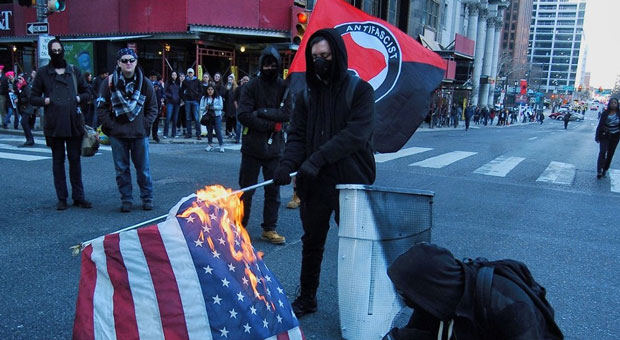 The devastating violence and rioting in Portland has not been sparked by opportunistic protesters but was “organized” by “violent Antifa anarchists,” a leaked Department of Homeland Security (DHS) email has revealed.

The email reveals that DHS has uncovered “overwhelming intelligence” that proves that “Violent Antifa Anarchist Inspired” (VAAI) individuals have been behind the months of violence, rioting, and looting that have ravaged the Democrat-run Oregon city.

An email that was written by Brian Murphy, former Acting Under Secretary for Intelligence and Analysis at DHS, was obtained CBS News reporter Catherine Herridge.

In July, the violence in Portland had reached a level that officials could no longer state was “opportunistic” but that it was “organized,” according to the email.

The individuals who were attacking the federal facilities in the city did so “based on those ideologies,” Murphy stated in the email.

The email reveals Antifa has ‘organized’ the violent rioting in Portland, according to DHS

“We have overwhelming intelligence regarding the ideologies driving individuals towards violence and why the violence has continued,” Murphy continued.

“A core set of threat actors are organized, show up night after night, share common TTPs [tactics, techniques and procedures] and drawing on like minded individuals to their cause.”

“I recognize we may not be able to attribute every individual as VAAI, however, we need to look at the totality of the intelligence both current and previous and recognize the motivation for the violence and why people have shown up to commit violence for about 60 days and why individuals are using social media to encourage the VAAI on the ground to carry out acts of violence,” the email continued.

#Whistleblower #PortlandProtest Breaking: According to this @DHSgov internal email, obtained @CBSNews, former Acting Under Secretary for Intelligence & Analysis Brian Murphy wrote colleagues on July 25th that the Portland violence was not “opportunistic” but “organized” citing pic.twitter.com/K7Aoe0yFbB

are organized and show up night after night, and share common TTPs (Tactics, Techniques and Procedures)..”

“Threat actors who are motivated by Anarchists or ANTIFA (or a combination of both) ideologies to carry out acts of violence against State, Local and Federal authorities..”

The email stated that when a threat actor was encountered that was not VAAI that the department would “obviously adjust” to the specific circumstance.

“The VAAI is specific to Portland and specific to the Federal, State, and Local facilities under violent assault,” the letter continued.

“If similar situations arise down the line the VAAI may apply.”

The email said that the VAAI definition that the department would apply going forward is the following:

Threat actors who are motivated by Anarchist or ANTIFA (or a combination of both) ideologies to carry out acts of violence against State, Local, and Federal authorities and infrastructure they believe represent authority or represent political and social ideologies they reject.

During a Fox News interview late last month, DHS Secretary Chad Wolf said that federal authorities were “targeting and reviewing” the heads of Black Lives Matter, Antifa, and those who fund them.

“Department of Justice is also targeting and investigating the head of these organizations, the individuals that are paying for these individuals to move across the country,” Wolf said.

“What we know…is that we have seen groups and individuals move from Portland to other parts of the country.

“We had about 175 arrests in Kenosha, almost 100 of them were from out of state.

“So, we know they are moving around. We have seen them in D.C., in Sacramento, and elsewhere.

“They are organized. We have seen similar tactics being used from Portland and other cities across the country as well.

“So, we know that there is organization.

“I know the Department of Justice is also looking at that as well.”