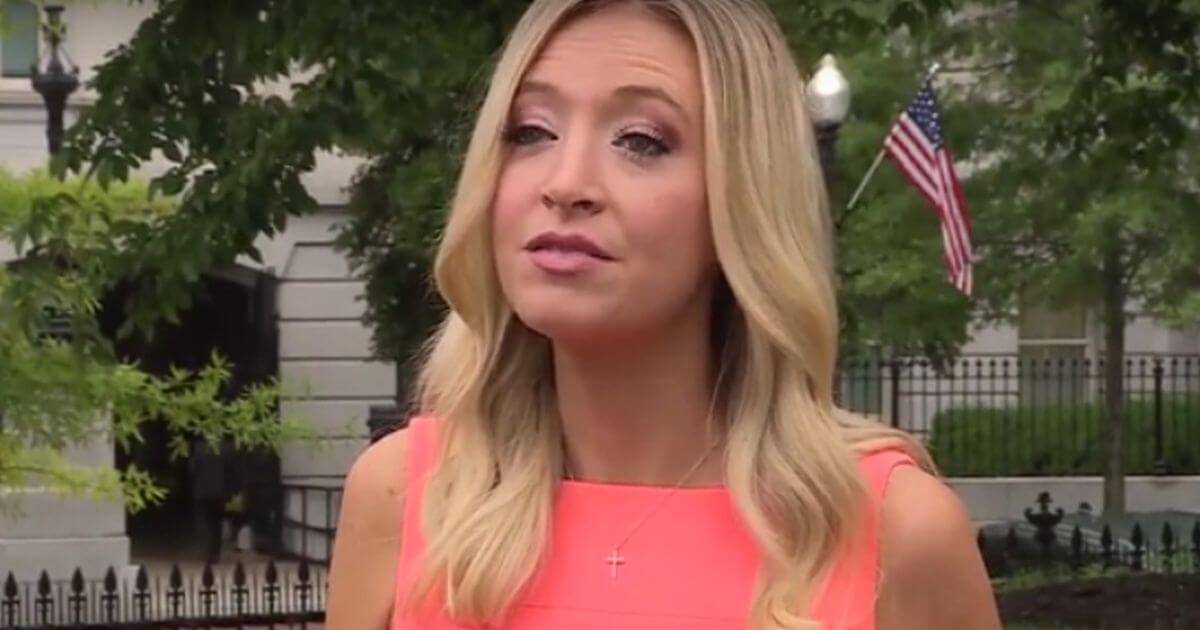 The American left miraculously discovered an infallible preventative measure in the fight against COVID-19 this May — and White House press secretary Kayleigh McEnany has officially snatched the formula.

McEnany stonewalled an establishment media question about President Donald Trump’s campaign rally sizes in a Wednesday news briefing, defending the rallies with the tongue-in-cheek argument that attendees were engaged in “peaceful protest.”

“Why did the president have thousands of people, many not wearing masks, at a rally last night in a state that has limited outdoor gatherings to 50 people?” the reporter asked, referring to Trump’s rally Tuesday in North Carolina. “Why is he going to Nevada this weekend to hold similar outdoor rallies, gathering these large numbers of people in violation of his administration’s own guidance and of the best advice and guidance of local officials, who he has said should have the final say in these matters?”

“People have a First Amendment right, if they so choose, to show up and express their political opinion in the form of a peaceful protest, which is what the president held.” McEnany replied, going on to address clearly partisan inconsistencies in news media outrage over recent political demonstrations.

“There is a real double standard here. CNN had on a guest, apparently a doctor, Rob Davidson, who said, ‘Now, true, there are social distancing issues with regard to the protests we’ve seen around the country. However, this is a public health crisis. They are marching against systemic racism,’” the press secretary said.

Reporter: Why does the president have thousands of people at rallies?@PressSec: It’s a peaceful protest. pic.twitter.com/ReUiqeAgwh

“So, if you’re allowed to march in aggregate in those protests, you are also allowed to show up at a political rally. You have a First Amendment right in this country,” McEnany added.

The question that prompted the response had, of course, been pursued in a bad faith attempt at leftist grandstanding.

Why else would the reporter responsible have followed up with an unsolicited remark on Trump’s “responsibility to keep people safe?”

Put plainly, he wouldn’t have, were it not for his nauseatingly clear-cut compulsion to score points with the White House media corps at the expense of any administration official who gets in his way — an urge now found among most members of the establishment media sphere.

And that urge has presented itself throughout the course of the viral outbreak, with Democratic politicians and left-wing media personalities frequently taking time out of their oh-so-busy schedules to tar and feather conservative protesters in favor of ending the lockdowns and re-opening the economy as uninformed or downright apathetic to those who have died of the coronavirus.

Those figures were similarly riled up with regard to a lack of social distancing displayed at certain in-person Republican National Convention events.

Lead CNN White House correspondent Jim Acosta, a personality known almost exclusively for his opposition to the Trump administration, was outspoken in coverage of the convention’s fourth and final night, suggesting Trump’s crowded acceptance speech would serve as a super-spreader event for the virus.

“We not only heard a lot of gaslighting tonight,” Acosta said.

“We possibly saw and witnessed some super-spreading from this event.”

On the lack of social distancing or face masks at Trump’s #RNC2020 acceptance speech in the middle of the deadly coronavirus pandemic, a senior White House official tells @Acosta: “Everybody is going to catch this thing eventually.”

No such worry was extended by the establishment media in recent weeks and months with regard to similar left-wing displays, from tightly gathered and at-times unmasked protesters harassing RNC attendees on their way out of the event to thousand-man social justice protests and riots nationwide.

As protests gave way to riots in nearly every American metropolitan area, claiming lives and causing millions of dollars in damages, leftist leaders looked the other way or outright encouraged the massive demonstrations despite their potential to drive an increase in viral transmission.

In fact, unlike in-person voting, campaign rallies and church, the protests actually do seem to have had an impact on the increased viral load in certain U.S. cities.

But you’ll never see the “mostly peaceful” 2020 race riots portrayed in news reports and history books as a major contributing factor to the year’s stateside pandemic.

No. That kind of blame is reserved for Republicans.