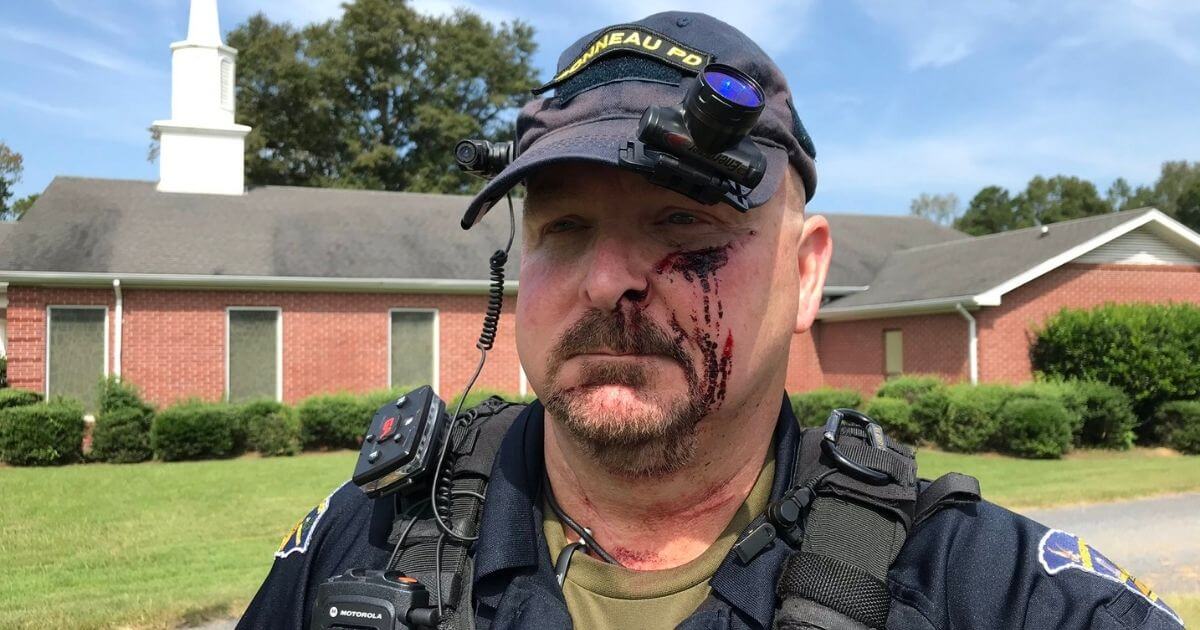 You likely don’t know Franco Fuda’s name. You should.

Fuda is the police chief in Bonneau, South Carolina. On Monday, just before 10 a.m., there was a knock at Fuda’s door, WCSC-TV reported.

Upon opening it, Fuda came face to face with a man who told him that he was “going to die today.” The police chief was then stabbed in the face with an ice pick.

The accused, Forrest Bowman, retreated from the scene and holed himself up in his trailer, according to police.

Berkeley County Sheriff’s officials were called in and thus began a tense standoff.

TRENDING: Biden’s Former White House Stenographer Expresses Deep Concerns About His Mental Acuity, Says Not The Same As When He Was VP

Bowman was already out on bond. Two years ago, he was charged with threatening a police officer — namely, Chief Franco Fuda. WYFF-TV also reported he was out on bond for a prior threat against a pastor and police officers.

The SWAT team was then called in. It sent a robot into the trailer looking for Bowman, who was told to surrender several times.

#BREAKING Bonneau Police Franco Fuda was stabbed in the face with a screwdriver this morning. The @BerkCoSheriff says the suspect is holed up inside his trailer. Warning: the video is graphic. #chsnews pic.twitter.com/E7ycUlWUV9

Eventually, just before 12:30 p.m., the SWAT team made its move and carried Bowman out.

Deputies said he had been found naked between a mattress and a wall, kicking and screaming as he was taken into custody.

A sheriff’s office spokesman said that a tear gas bomb was used during the standoff.

Initial reports said Fuda was attacked with a screwdriver — although this was amended to an icepick, for those of you keeping score.

Bowman is currently charged with, among other things, attempted murder. He’s being held without bond.

Forrest Bowman was out on bond on charges he threatened the police chief two years ago. https://t.co/I1ONb2KNyu

Why, then, should we know Franco Fuda’s name? Consider the fact that, aside from a smattering of local stories about the case, we’d hardly know his name.

In fact, he’s also best known for a 2011 case in which he issued a fine to a woman who displayed a fake pair of testicles below the trailer hitch on her truck for violating state obscenity laws.

I mention that only because in that case, even Reuters filed a report on the ticket and the subsequent jury trial it engendered. One was left with a distinct impression about the combination of juvenile behavior in adults (the woman who had the display on her truck, Virginia Tice, was 65 years old) and the old stereotype that there’s so little going on in small-town America that they’ll take this kind of asininity to trial.

In this case, Fuda was stabbed in the face emerging from his home. There was silence on the part of Reuters, as indeed there was throughout most of the establishment media.

This is the dangerous part of a job that so often seems thankless of late. Fuda wasn’t targeted, one imagines, because he was an average citizen, but because he’s the police chief of Bonneau. He’s banged up but will survive.

Were this the other way around, of course, this would be major news — apples-to-oranges, but also something worth considering.

Here, it’s an afterthought even in local media. It’s something that gets sandwiched into a newscast on a station where the top story on the website as of Thursday morning, at least with WCSC, was “Charleston County deputy hurt in crash is now able to walk again.” Important stuff? Sure. Perhaps of less import is the third most-prominent headline, “Family dog helps police nab suspected car thief in Minn. neighborhood.” That’s thousands of miles away but, hey, dogs.

Men and women like Franco Fuda don’t necessarily make national headlines, especially not now. If you want to know why, look at the Twitter replies to the picture of Fuda with his stab wound in the face.

Kudos to the swat team….great job….and they didn’t have to shoot him in the back 7 times….maybe they should conduct countrywide zoom training sessions

I wonder why this didn’t get picked up.

The current narrative on police officers is that they’re little more than unchecked predators who remain unchecked because of a deadly code of omerta among those who aren’t. The bad apples make the others rotten, as you’ve no doubt heard. No sympathy for the devils, after all.

We’ve even stopped with rhetoric such as, “Yes, our police officers put our lives on the line for us, bu~ut…” We just go straight to the “… bu~ut” part, cut out the qualifier and start from there. Police are the wretched of the Earth. Change my mind.

This would. This is why we need police. This is why mental health facilitators don’t always work. This is why the bravery of our men and women in uniform should never be discounted.

“People have a bad opinion about Chief Fuda, but I’m telling you he’s a wonderful man,” said Debbie Hood, a resident of the town who used to feed Bowman at her house when he was young. “He would do anything he can do to help you. And I thank the Berkeley County Sheriff’s Department for handling it as well as they did.”

This is how most people feel about their local police officers, even if they want some changes made.

This is the nightmare those police officers often have to deal with as a reality of their jobs — even if they’re in a small town with relatively little crime.

This is what anti-police sentiment can breed. If we allow it to incubate, we absorb some of the responsibility ourselves.

It’s a story that deserves to go national — if just as an antidote to the kind of invective that’s heaped upon those who keep us safe.