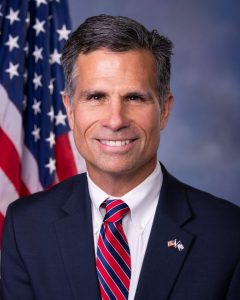 Meuser issued a statement on Saturday afternoon announcing the positive result and that he’s following CDC health and safety guidelines.

“As your member of Congress, I wanted to inform you that, very unfortunately, I tested positive for COVID-19,” Meuser wrote in a statement. “I have been following all CDC health and safety guidelines, and will be taking all necessary actions, including postponing upcoming public events and working from home in quarantine until I receive a negative test result. I am thankful to God that my grown children were not at home and that my wife Shelley has tested negative.”

The Luzerne County Republican added in the statement that although he would be unable to vote on H.R. 8015, the Democratic backed legislation to provide additional funding for the USPS, he would have voted “NAY.”

“Because of this, I will not be present or voting today on H.R. 8015,” Meuser wrote in the press release. “I will, however, submit for the record that I would have voted ‘NAY.’”

Meuser continued in the statement to say that he will always “support a strong, effective post office,” and pointed to Congress allocating a $10 billion loan through the CARES Act to the agency as proof that no more money was needed.

Every Democratic member of the state’s Congressional delegation, plus Rep. Brian Fitzpatrick (R-Bucks), voted for the $25 billion emergency funding bill to the USPS. All other Republicans in the state’s delegation voted no, with the exception of Rep. Mike Kelly (R-Butler) and Meuser, who did not vote.

Meuser is now the second member of the state’s congressional delegation to test positive for COVID-19.

In late March, Rep. Mike Kelly (R-Butler) tested positive for COVID-19. Kelly has since recovered, although he told KDKA in an interview in late April after his recovery that he lost 30 pounds and said that the virus was “tough to get through.”

Rep. Matt Cartwright (D-Lackawanna) self-quarantined for two weeks in March after coming into contact with a confirmed COVID-19 patient. Rep. Guy Reschenthaler (R-Allegheny) also self-quaranted for two weeks starting in late July after he was in close contact at the capitol with Rep. Louie Gohmert (R-TX), who tested positive for coronavirus.