“ITV has commissioned a series of four drama shorts, working titled Unsaid Stories…, which have been inspired by the Black Lives Matter movement”

If you’ve spent any time watching television in recent months, you have probably noticed countless advertisements from companies bending over backwards to ingratiate themselves to the Black Lives Matter movement.

Now this is making its way into TV shows as well.

EXCLUSIVE: ITV has commissioned a series of four drama shorts, working titled Unsaid Stories…, which have been inspired by the Black Lives Matter movement.

In an anthology format not dissimilar to the Jeff Pope-produced Isolation Stories that ITV aired during the coronavirus lockdown, Greenacre Films — the producer behind Netflix’s Michaela Coel-fronted feature Been So Long — will make the 15-minute episodes to be broadcast next month.

Each episode has diverse talent at its heart and ITV head of drama Polly Hill said they are “unique, fresh and engaging” stories about “real people in completely real situations, confronting and exploring racism and prejudice.”

Jerome Bucchan-Nelson, a writer on Sky hit drama Bulletproof, will pen Generational. It explores the relationship between a Black father and his teenage daughter, when William catches Justina sneaking out to attend a Black Lives Matter demonstration. Alrick Riley (NCIS) is the director, while Barbara Emile (EastEnders) is producing.

If you have Netflix, you know they already have multiple offerings on the topic. Here’s a screencap: 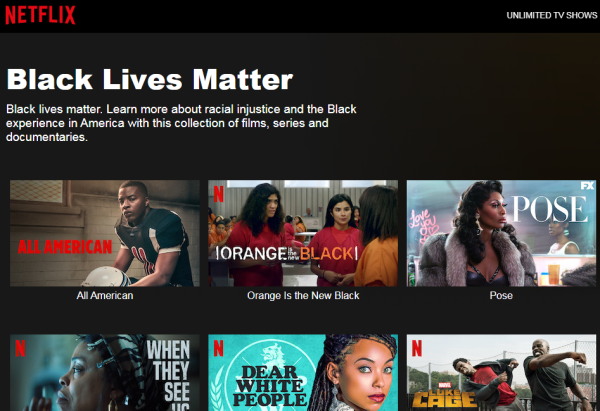 Netflix launched this back in June.

Netflix is promoting a new “Black Lives Matter” collection to U.S. subscribers, featuring over 45 titles about racial injustice and the experience of Black Americans.

Netflix began displaying a popup screen (pictured above) featuring the Black Lives Matter collection Wednesday when users first logged in to the service on the web or connected-TV devices. The streamer also added the collection to users’ notifications.

I’m not saying this is related, but it seems worth mentioning that the Obamas and the Clintons are now major players at Netflix.

Tina Nguyen wrote at Vanity Fair back in May of 2019:

The Clinton Dynasty Sets its Sights on Obama’s Hollywood

With Netflix and other streaming video companies pouring millions of dollars into political content, perhaps it was inevitable that the Clintons might want a piece of the action. Bloomberg reports that Hillary Clinton and her daughter, Chelsea, are forming a production company, and have already spoken to studios about financing a “pipeline” of film and television projects that emphasizes “stories by and about women.”

Of course, the real prize here is cultural, not financial, capital. In the first decade after Bill Clinton’s presidency, the family exercised soft power through its Clinton Foundation, which served as a clearinghouse of sorts for corporations, wealthy donors, and foreign governments seeking to transmute sometimes dirty money into philanthropic good works. But in the new-media economy, in which eyeballs are the only currency that really matters, there are more palatable ways to wield influence. Barack and Michelle Obama were the first ex-presidential couple to grasp the new paradigm, inking a likely eight- or nine-figure deal with Netflix to produce series and movies for the streaming service.

The left is determined to embed their message in everything. The news you consume, the TV shows and movies you watch, the lessons your children learn at school, and more.

The only escape is to turn it off.