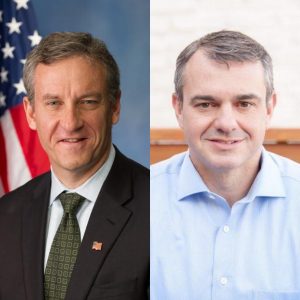 The race in the 8th Congressional District is moving in the Democratic incumbents favor, according to the latest ratings from the election analysts at the Cook Political Report.

Rep. Matt Cartwright’s (D-Lackawanna) race has moved from a Toss Up to Leans Democratic. They credit the rating change due to a multitude of reasons including former Vice President Joe Biden’s lead in Pennsylvania over President Donald Trump in recent polling plus Cartwright’s cash advantage over GOP challenger, Jim Bognet.

“In January, this Scranton district looked like a terrific GOP opportunity: Cartwright had just voted for impeachment (the 8th CD voted for President Trump by ten points), and Republicans had a promising candidate in wounded warrior and adaptive athlete Earl Granville,” David Wasserman writes. “But Granville failed to raise money and didn’t make it past the primary. And now, Trump trails Scranton native Joe Biden in Pennsylvania.”

“Former Trump Export/Import Bank official Jim Bognet won the primary with big margins in Trump-friendly Luzerne County, but will need to break through in Democratic Lackawanna County, where Granville ran strongest (read our full evaluation here),” Wasserman continued. “Republicans still hope they can “buy” the seat because the Scranton market is so cheap, but Cartwright led Bognet $2.3 million to $278,000 in cash on hand at the end of June.”

For most of 2019, Cartwright was viewed as the favorite in the race by the ratings analyst, but the rating change to Toss Up happened in late December when Cartwright voted for both articles of impeachment against Trump. Now, the race has moved once again to Leans Democrat.

Cartwright won his most recent reelection bid over GOP businessman, John Chrin, in 2018 by 9 points in the newly drawn congressional boundaries that voted for Trump by 10 points in 2016, making it the most Trump friendly seat held by a Democrat in the state.

Entering election day in 2018, the Cook Political Report had Cartwright’s race against Chrin as Likely Democrat.

With the race in PA8 shifting to Leans Democrat, the only congressional race in Pennsylvania left in the Toss Up column is Rep. Scott Perry’s (R-York) reelection bid in the 10th Congressional District. Reps. Cartwright, Brian Fitzpatrick (R-Bucks), and Susan Wild (D-Lehigh) have the next closest races in the Cook Political Report with those three races as “leaning” in the incumbents favor.

The latest Cook report ratings can be found here.