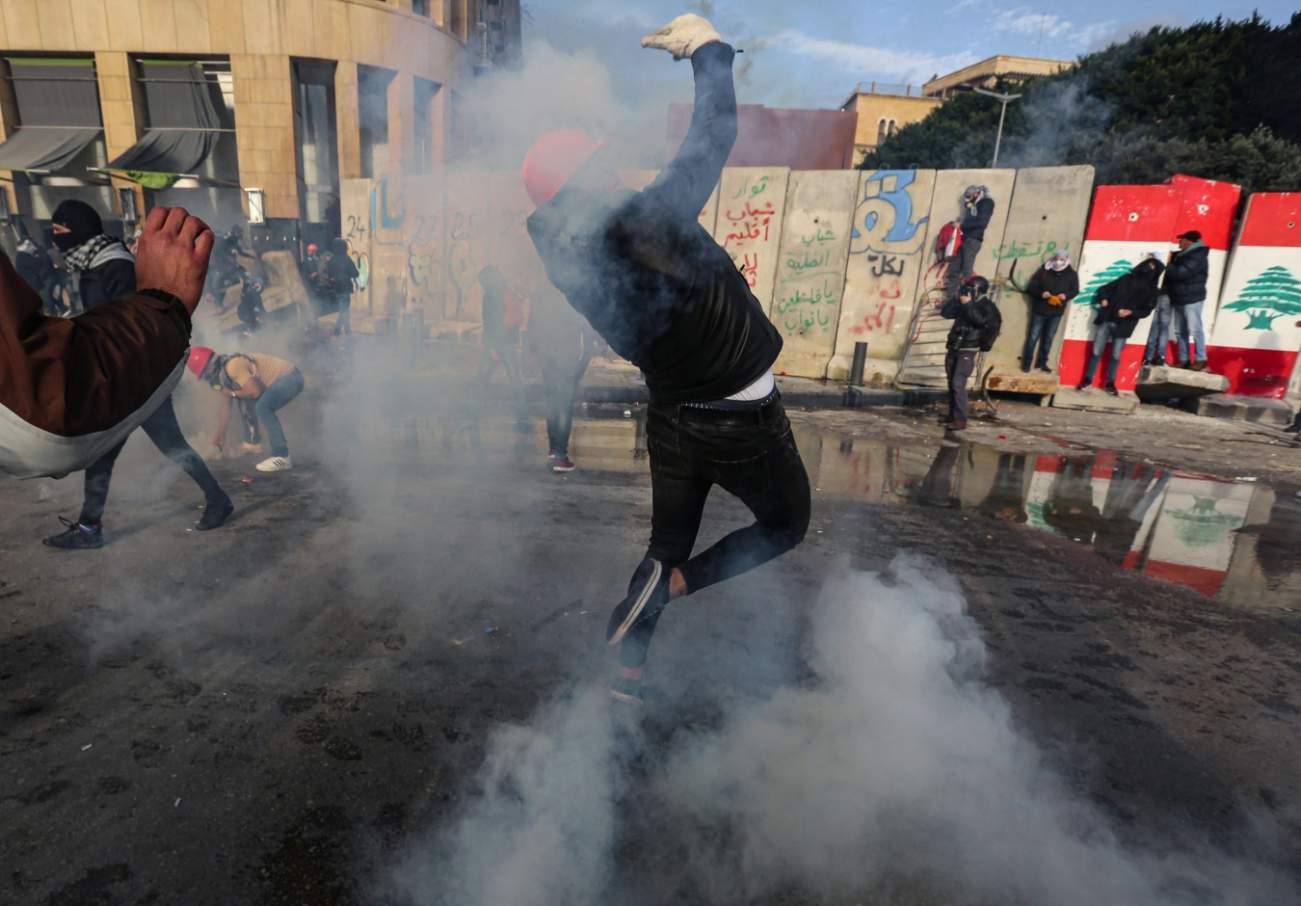 The Middle East is not on the precipice of a great regional war. The future is more likely to look like Lebanon: fractured and constantly in turmoil.

The targeted killing of Qassem Suleimani, the leader of Iran’s elite Quds Force, and the subsequent Iranian missile strikes on U.S. bases in Iraq, brought talk of war in the Middle East to a fever pitch. Members of Congress, former U.S. secretary of defense Leon Panetta, policy pundits such as Daniel Byman and Trita Parsi, and various media outlets claimed that the events had brought the region to the brink of war.

Directly or indirectly informing many of these opinions and reactions were arguments like Robert Malley’s November/December 2019 Foreign Affairs article: “The Unwanted Wars: Why the Middle East Is More Combustible Than Ever.” Malley contends that the Middle East currently epitomizes a paradox. As its societies, countries, and the region become more fractured, it is simultaneously becoming more integrated through the emergence of transnational movements and the intervention of external actors in domestic disputes. According to Malley, these two phenomena have turned the Middle East into a tinderbox where a domestic event has the capability of triggering a broader war between various countries.

For example, the fracturing of Iraqi society led some in Iraq’s Shia community to integrate with Iran—they became an extension of Iranian influence and power. Suleimani’s support for and cooperation with Iraqi Shia militias was the visible manifestation of this phenomenon. Therefore, any U.S. confrontation with those Iraqi Shia militias could trigger a war between the United States and Iran. Malley points out in his article that Syria and Yemen are locales for triggering a war that will inevitably drag in the United States or other countries. His recent tweets and retweets reflect a similar perspective regarding the events in Iraq.

The events surrounding the Suleimani killing, or lack thereof, suggest that the assertions of Malley and others are unwarranted. The region is not on the precipice of war. It is not the tinderbox that many perceive, nor will it be in the near future. Countries intervening in domestic Middle Eastern conflicts have demonstrated an unwillingness to escalate when their interests are challenged or threatened.

Utilizing and speculating with the brief and contemporary scenarios of Iraq, Syria, and Yemen fails to recognize the reality of the region. One must observe the dynamics of Lebanon over an extended period of time to understand that the region is not prone to larger conflicts. Ultimately, this oversight of Lebanon inhibits more concise analysis, deeper comprehension, and U.S. policy recommendations for the Middle East.

Lebanon—not Iraq, Syria, or Yemen—is the model and the guide for the contemporary Middle East. Lebanon embodies the paradox identified by Malley—fracturing and integration. Lebanon has a history of seventy-plus years of deep societal divisions and conflicts intertwined with external interference and transnational movements. This long-term experience makes Lebanon a rich laboratory for comprehending developments, critiquing, and constructing effective policy for the conflicts of today’s Middle East. It can also prepare policymakers for what lies ahead after the conclusions of these conflicts.

Lebanon has experienced a weak state structure and powerful non-state actors for decades. Lebanon has been and continues to be a microcosm of the region’s numerous rifts: the Arab-Iranian-Israeli conflict consumes it; the Sunni versus Shia dynamic is ever-present; its Sunni community is increasingly fragmented. It is also a locale for the U.S.-Iran confrontation.

The increased fracturing and integration of the Middle East is creating more Lebanons. Iraq, Syria, Yemen, and Libya are beginning to closely mimic Lebanon during times of peace and war. Sudan, Algeria, Egypt and others may soon follow. We are witnessing a rise in the number of states without nations in the Middle East—a status Lebanon has claimed since 1943.

A state without a nation entails the existence of autonomous administrative offices and a socio-economic structure; however, national identity is weak. Sectarian/ethnic identities, ideological movements, and tribal affinities in these states compete or challenge the national identity. The absence of a cohesive society undermines the functionality of the state. This reality produces poor governance—exclusion of communities, corruption and the lack of accountability—and provides an invitation for other actors to intervene.

States without nations exhibit certain attributes, behaviors, and outcomes during times of war and peace. The presence of security dilemmas in communities and movements creates friction and violence within and between communities and movements. In this environment, mutually beneficial relationships develop between communities/movements and external actors. These characteristics produce an unwillingness to compromise, the projection of outside influence on domestic affairs, and sensitivity to regional developments. Outcomes include intransigence, further polarization, ad-hoc or incomplete solutions, a lack of enforcement of policies, and the termination of relations with external actors.

Striking parallels exist between Lebanon and today’s Middle East. Similar to Lebanon’s Maronite Catholic community, the Tebu of Libya perceive themselves to be under an existential threat. The failure of the Iraqi government to achieve a monopoly on violence in the post-ISIS era resembles Lebanon’s decades-long experience with Hezbollah and the PLO. Comparable scenarios will inevitably appear in Syria, Yemen, and Libya. Iraq and its public utility problems are equivalent to Lebanon’s continual failures with its public utilities. Iran is projecting its influence into Iraq, Syria, and Yemen like it did in Lebanon starting almost forty years ago. The amount of domestic and foreign actors currently involved in Libya’s civil war rivals the number of actors involved in Lebanon during the early 1980s.

A Powder Keg without a Fuse

The increased fracturing and integration of the region reduces the likelihood for larger conflicts. The rising number of states without nations is producing more opportunities for external actors to intervene. With more opportunities, no one is required to put all their eggs in one basket or put all their cards on the table. This reality makes it unlikely that the region will be engulfed by a larger conflict(s). A defeat or setback in one locale does not mean the end for a country like Saudi Arabia or Iran. There are other opportunities or opportunities inevitably re-emerge in the same locales.

The fractured nature of Lebanese, Iraqi, Syrian, Yemeni, and Libyan societies will continue to produce conflict and tension thus making them fertile ground for intervention and prone to upticks in violence. Countries will continue to project their influence into these locales, but with limits. History demonstrates that they do not risk it all. When push comes to shove, external actors like Saudi Arabia, Qatar, Iran, and others are not willing to stick out their necks for their clients. It is not in their interests, nor do they have to. Why risk a larger conflict when other relationships can be pursued or relationships with clients can be resurrected in the future?

Once again, Lebanon is our witness to this behavior. The 1976 Syrian assault on elements of the PLO in Lebanon on behalf of Lebanon’s Maronite leadership did not trigger an Arab war. Nor did it terminate relations between Syria and all PLO factions. Iran did not intervene on behalf of Hezbollah during Israel’s Operation Accountability in 1993, Israel’s Operation Grapes of Wrath in 1996, and the 33-Day War in 2006. During Syria’s occupation of Lebanon, Syria did not deter Israeli overflights of Lebanon and watched as Israel bombed Lebanese infrastructure.

The unwillingness of Iran or Syria to come to the aid of their Lebanese allies did not prevent these allies from continuing to seek out Iranian and Syrian assistance. Moreover, the Syrian-Israeli air battle over Lebanon in 1982 did not produce a larger war. The bombing of the U.S. Marine barracks in 1983 did not precipitate an extensive conflict against Syria or Iran.

U.S. policymakers currently have no viable options at resolving disputes between the Iraqis, Yemenis, Syrians, Lebanese, Libyans, and others. It is an exercise in futility and a waste of resources for the United States to deeply engage in the local level of these respective environments. Day-to-day politics and conflicts in the Middle East, particularly in Iraq, Syria, Yemen, Lebanon, and Libya, are increasingly complicated because of polarization and integration.

The fracturing of these societies between and within communities coupled with the propensity of external interference has multiplied the number of actors and interests involved. It makes negotiated settlements or facilitating political agreements incredibly challenging to achieve. For example, the formation of the Iraqi government is taking longer, and numerous summits pertaining to the Syrian conflict have produced few tangible long-term results.

U.S. policymakers need to first engage these conflicts and political tensions at the regional level. External interference exacerbates conflict and political gridlock by preventing compromise and maintaining military aid. Reducing the number of regional actors involved reduces the number of interests that shortens political gridlock and conflict. The onus is then placed on the local actors to address their divisions and disagreements. It is the only constructive path forward, albeit a very slow and not entirely peaceful one. The Taif Accord did not end Lebanon’s fifteen-year civil war. It was the international isolation of General Michel Aoun’s army and his defeat by the Syrian army that brought an end to the war.

The United States can achieve this objective with a two-pronged approach. It must diplomatically address divisions and disagreements with its allies and between U.S. allies. It must also minimize Iranian interference in these milieus through the maintenance of the maximum pressure policy. If the maximum pressure policy is maintained, the Iranian government will increasingly be forced to choose between its citizens and its Yemeni, Syrian, and Iraqi clients. Glimpses of this are appearing in Iran with the protests surrounding the hike in gas prices.

Referencing Lebanon dampens the hysteria surrounding the imminence of a great war in the Middle East. Robert Malley and others have overlooked the usefulness of Lebanon for diagnosing and remedying the many problems of the Middle East. Lebanon is a valuable, largely untapped resource for U.S. policymakers, because Lebanon has had an extensive history with the region’s current dynamics and afflictions.

Sadly, remedying the region through the lens of Lebanon suggests no ideal path forward. Effective policies will be arduous, slow, and sometimes painful. Also, similar to Lebanon, it does not appear that the region will shed its afflictions any time soon.