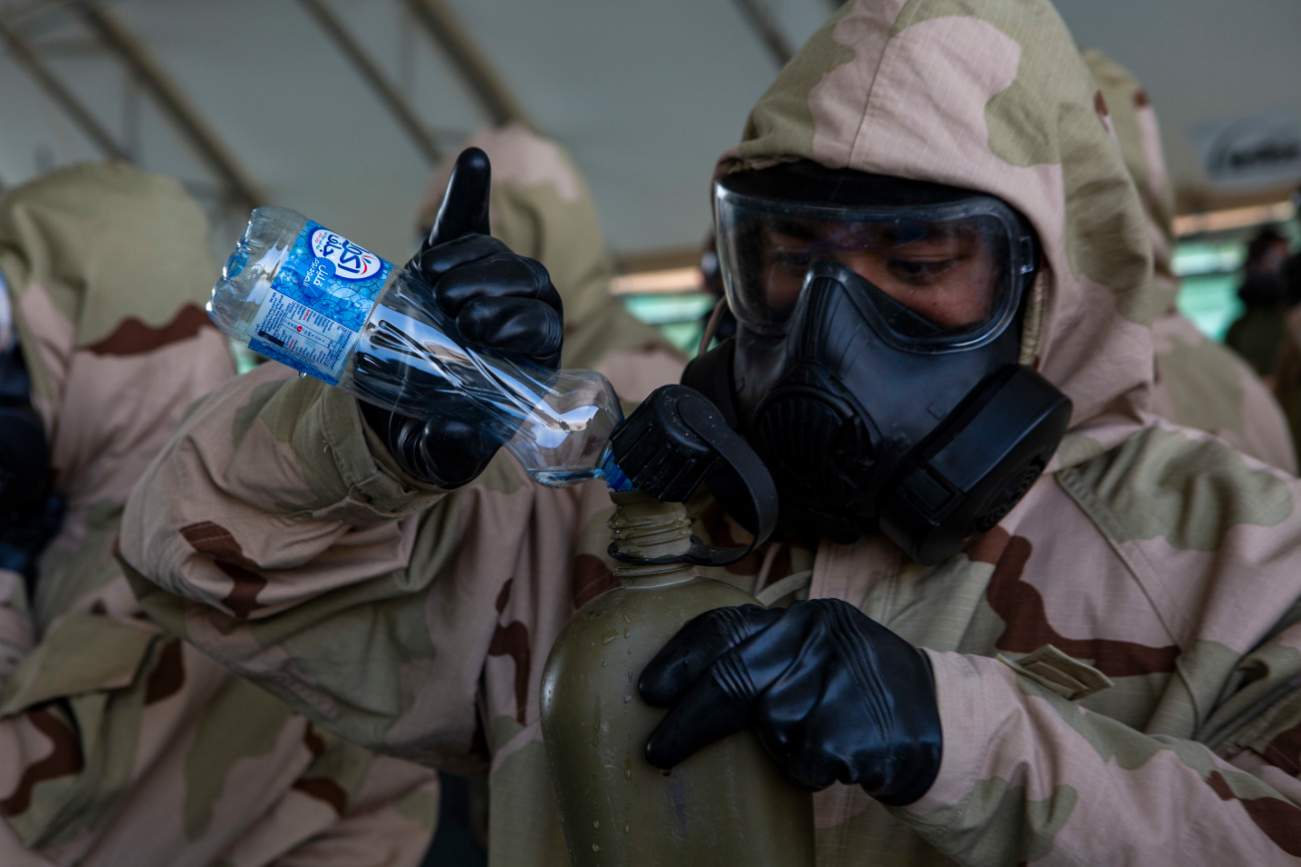 Not a good way to go.

Key Point: No wonder these weapons of war are banned.

The residents of Khan Sheikhoun probably thought they were in for just another ordinary day of civil war when they woke up early in the morning of April 4 to the whine of approaching Syrian Air Force Su-22 attack jets. The town of around fifty thousand people was situated west of Aleppo in Idlib Province, long a stronghold of rebel groups opposing the government of Bashar al-Assad since 2011. Artillery and air attacks were a horribly routine aspect of daily life there, as they are in many parts of Syria, divided by numerous warring factions.

Residents later reported that the munitions dropped by the jets released clouds of poisonous gas. Even this was hardly unheard of in Idlib Province. Even while Assad handed over his stockpiles of mustard gas and deadly nerve agents, government helicopters launched at least a dozen chlorine-gas attacks on communities in Idlib Province alone in 2014 and 2015. However, while chlorine gas causes horrifying respiratory problems, particularly in children and the elderly, it usually killed “only” a handful of people per attack, if any.

However, rescuers arriving from outside Khan Sheikhoun beheld an unexpectedly nightmarish sight: more than six hundred civilians lying paralyzed in their homes or helpless on the ground, limbs convulsing, saliva foaming from their noses and mouths as they gasped for breath. Local first responders—the lucky ones that hadn’t died or fallen violently ill when arriving on the scene—were frantically spraying the twitching bodies with hoses.

These symptoms correspond to the effects of sarin, a colorless, odorless nerve agent that disrupts acetylcholinesterase, an enzyme that helps a muscle relax once it has completed an action. By blocking the enzyme, sarin has the effect of continuously triggering those muscles, making breathing effectively impossible as well as causing the breakdown of other bodily functions, and leading to the discharge of bodily fluids.

Though inhalation of the vapors is the primary vector of the agent, even skin contact can transmit a fatal dose of sarin to victims, who may die within one to ten minutes of exposure due to asphyxiation and the loss of bodily functions. Those surviving initial exposure may suffer permanent brain damage if they do not receive swift treatment. Even worse, particles of the gas cling to clothing, food and water, and can remain lethal for up to thirty minutes. That was why responders were washing the victims with hoses.

Reports currently suggest that eighty to one hundred of the residents were killed, and over six hundred injured. On Thursday, a Turkish hospital claimed its examination of the victims confirmed the use of sarin gas.

Chemical weapons are often collectively labeled weapons of mass destruction, but many of them—fortunately—have a low fatality rate, serving principally as weapons of terror rather than attrition.

Sarin and other nerve agents are a notable exception. Only thirty-five milligrams of sarin per cubic meter are necessary to kill a human being after two minutes of exposure, compared to nineteen thousand milligrams for chlorine gas, or 1,500 for phosgene gas, the deadliest chemical weapon used in World War I. The latter invisible gas often killed those affected the day after exposure, meaning it was not especially practical for achieving battlefield objectives. Mustard gas, which was highly visible and widely feared, caused horrible blistering injuries on contact with the skin, but killed only two percent of those it scarred.

The first nerve agent was accidentally discovered by German scientist Gerhard Schrader in 1938, who had to be hospitalized for three weeks after exposing himself to a partial dose of tabun. Realizing the gas’s potential as a weapon, Nazi Germany developed four different “G-Series” nerve agents and produced tens of thousands of tons of the deadly poisons—at the cost of a dozen workers, killed by contact with the deadly liquid despite the use of protective suits.

Fortunately, Hitler ultimately shied away from using nerve agents. This wasn’t because of some deeply buried shred of decency. When Hitler inquired about using sarin against the Allied powers, he was told by IG Farben chemist Otto Ambrose—who himself had tested the gas on human subjects—that the Allies probably had nerve agent stocks too, and would likely retaliate on an even greater scale. This was a fortunate misperception, as the Allies did not possess any nerve agents at all and were completely unaware the Germans had them.

After World War II, both the Soviet Union and Western nations studied up on the German poisons and developed even deadlier “V” series nerve agents, most notably the VX gas rather inaccurately depicted in the 1996 film The Rock. However, the taboo against using lethal chemical weapons on the battlefield was mostly respected—with some notable exceptions.

Egypt dropped mustard and phosgene gas from Il-28 bombers over villages in North Yemen between 1963 and 1968, killing an estimated 1,500 people. Nerve agents may also have been used by Vietnamese troops in Cambodia, Cuban troops in Angola and the Pinochet regime in Chile. Iraq unleashed mustard and sarin gas during the Iran-Iraq War on poorly armed Iranian militias executing human wave attacks. Then on March 16, 1988, Iraqi aircraft bombed the Kurdish town of Halabja with a mixture of both gasses, massacring between three and five thousand people in just five hours.

As my colleague Paul Iddon pointed out in a recent article, there’s a common thread in the use of chemical weapons since World War I: they’re nearly always used by governments against victims that lack the ability to retaliate in kind.

Even as far back as World War I, the opposing armies successfully phased in training and equipment that limited the effectiveness of chemical weapons. Whenever one side employed a new type of gas, the other soon copied it and retaliated. Chemical attacks failed to change the outcome of a single major battle, despite their horrifying effects. Even worse, unpredictable winds frequently blew the poisonous clouds back onto friendly troops or towards civilians, who were much less well prepared to deal with them. That explains why many armies otherwise bristling with more and more deadly weapons aren’t begging to bring gas warfare back.

As early as 1925, the Geneva Protocol banned the use of chemical weapons in international conflicts, and was succeeded in 1993 by the Chemical Weapons Convention, which further forbade their stockpiling and production. (Syria is a signatory to the former but not the latter.) The United States renounced first use of chemical weapons in 1969 under Nixon, and then committed itself to destroying its stockpiles under George H. W. Bush in 1991—a process which was reportedly 89 percent complete in 2012.

Syria came to the brink of war with the United States after a sarin gas attack on August 2013 that killed hundreds of Syrians in Ghouta, a rebel-held suburb of Damascus. It was a clear violation of the international taboo against chemical weapons (which Syria denied even possessing at the time), and more specifically, the “red line” threat made by President Obama. However, Russia brokered a deal in which Assad pledged to give up his military-grade chemical arms in order to avert a U.S. attack. The process of destroying nearly six hundred tons of mustard, sarin and VX gas was officially completed in August 2014, and involved many international observers and contractors.

However, this did not bring a halt to government air attacks using chlorine gas to terrorize rebel-held communities. Because of its broad civilian applications, there is no way to “ban” chlorine. Syrian rebels—mostly, but not exclusively, belonging to ISIS—have also occasionally launched rockets laden with chlorine or mustard gas on government-held territory in Syria and even Iraq.

Meanwhile, there were persistent rumors that the Syrian army’s destruction of its chemical stocks was less than comprehensive, and that the Assad regime had hidden away small quantities to serve as a future deterrent. International inspectors also reported discovering trace quantities of sarin, VX and ricin in facilities that had not been listed as storing chemical weapons by the Syrian government.

Damascus admitted to launching the airstrike on Khan Sheikhoun with Su-22 fighter-bombers, but maintains its warplanes did not use chemical munitions. Predictably, Moscow claimed the chemical attack was the opposition’s fault, alleging Syrian bombs had hit a rebel chemical-weapons workshop. This was far from the first time the allied governments have advanced some variant of the classic “they bombed themselves” defense in regards to chemical attacks that mostly land in rebel territory.

However, chemical-arms experts don’t buy it, pointing out that even if opposition fighters had somehow managed to produce and store sarin agents with the binary precursors side by side for rapid use, blowing them up with a bomb would simply not have dispersed the gases to such murderous effect. They argue that such a deadly attack could only have been carried out by properly deployed chemical munitions.

It is vital that the Syrian Civil War not lead to a further breakdown in international norms against chemical warfare, resulting in their more frequent use in conflicts across the world. Chemical weapons have repeatedly proven to be inherently indiscriminate terror weapons, and have killed far more civilians than combatants in the Syrian conflict.

However, the vast majority of civilian deaths in Syria occur due to bombardments by conventional artillery, mortars and aerial bombs—including those dropped by Russian and American warplanes as well as the Syrian Air Force. Even without the use of chemical weapons, the suffering experienced by Syrians on all sides of the conflict will continue for some time if a viable political solution does not silence these “conventional” death machines.

Sébastien Roblin holds a master’s degree in conflict resolution from Georgetown University and served as a university instructor for the Peace Corps in China. He has also worked in education, editing and refugee resettlement in France and the United States. He currently writes on security and military history for War Is Boring.

This article first appeared several years ago. It is being republished due to reader interest.

Vlog: How a family in Wuhan mourns the deceased amid coronavirus