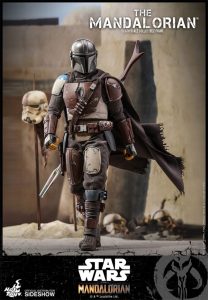 “Help us, Dave Filoni. You’re our only hope.”

On December 20th, J. J. “Death Star” Abrams and Disney Corp. will complete the destruction of the Star Wars saga that many of us have loved since childhood, while raking in untold millions by cynically exploiting nostalgia for the mythos they are desecrating. So pass the popcorn, because I’ll be right there, dear readers, to review it for you.

But the Disney-Star Wars marriage has not been entirely fruitless. Seventy-five percent—soon to be 80 percent—of their movies have been disasters, but Rogue One is a pretty good film.

And now we have The Mandalorian, the first live-action Star Wars TV series, which is a collaboration between Dave Filoni—the producer of the two excellent animated Star Wars series, The Clone Wars and Star Wars: Rebels—and John Favreau, director of such movies as Elf, Iron Man, Iron Man 2, Cowboys and Aliens, and the recent remakes of The Jungle Book and The Lion King.

Both Filoni and Favreau are pretty much creatures of the modern mass media. They probably believe all the tenets of political correctness. But in Filoni’s animated series, his love of Star Wars and geek/bro energy pretty much kept the worst excesses of SJWism at bay. Favreau is the wild card here, for he is half-Jewish and pretty much a Disney Corporation insider. Let’s hope the Force triumphs over the Schwartz, lest The Mandalorian be reduced to another Disney-Star Wars farce.

The Mandalorian is basically a Space Western, which is a fantastic tack but also a dangerous one because the bar has been set impossibly high by Joss Whedon’s Firefly, which is not just a Space Western but one of the best science fiction series of all time.

The Space Western is a good fit for the Star Wars franchise, because the original Star Wars drew upon elements of Akira Kurosawa’s The Hidden Fortress, and samurai and cowboy films are easily convertible, since the underlying warrior ethos is the same (Seven Samurai = The Magnificent Seven, Yojimbo = A Fistful of Dollars).

The title character is the Mandalorian with No Name played by Chilean-born actor Pedro Pascal (Oberyn Martell in Game of Thrones), with a low, husky, ultra-cool Clint Eastwood voice. The Mandalorian people were introduced as early as The Empire Strikes Back. At least Boba Fett wears Mandalorian armor. But they were developed extensively in Filoni’s two animated series as a people with a warrior-aristocratic ethos and a loose, feudal form of government. In the new series, we learn that they suffered greatly under the Empire, were scattered around the galaxy, and have adopted crypsis to survive. (Favreau’s fingerprints?) They follow a tradition and an honor code (“This is the way”). Like ronin (masterless samurai) and American gunslingers, they work as freelance wielders of violence (mercenaries, bounty hunters).

The Mandalorian with No Name is a bounty hunter, a profession introduced in the first trilogy. Here we learn that it is governed by a guild with its own code of conduct and technologies (bounty chips, which are basically wanted posters, and tracking fobs).

The first season of The Mandalorian has eight episodes, five of which have aired at the time of this writing. The opening three-episode story arc is utterly compelling, introducing the lead characters and their universe, and hooking us in. The story takes place shortly after the fall of the Empire, when law and order have broken down in the galactic rim (the Wild West) and both criminals and bounty hunters thrive.

The Mandalorian with No Name accepts a particularly lucrative unofficial bounty from a former high imperial officer (Werner Herzog, whose accent departs from the British norm for the Empire) guarded by a contingent of Storm Troopers, their armor somewhat worse for wear. After a series of trials, the Mandalorian with No Name captures the bounty, which turns out to be an adorable Yoda baby—a baby of the same species as Yoda. The Mandalorian delivers the baby and collects his bounty. But then he has second thoughts. The baby is strong with the Force, but he is obviously not a criminal, whereas the Imperials are clearly up to no good. So the Mandalorian returns, shoots up their base, rescues the baby, and they embark upon some Lone Wolf and Cub-style adventures. It is great television.

The fourth episode, however, is a big letdown. The Mandalorian lands on a planet where he promptly gets his ass whooped by a strang, independant, Xena-warrior princess badass wahman. But then he teams up with her to protect Diversity Village (there’s even a blonde child) from a band of marauders. It is basically a ripoff of Seven Samurai. I say “ripoff” rather than “homage,” because Star Wars already paid homage to Seven Samurai in a much better episode of The Clone Wars.

The fifth episode is much better but still rather light stuff, leaning heavily on nostalgia. The Mandalorian visits Tattooine, specifically Mos Eisley, and yes, even that specific cantina, where he asks around for work. He meets a rookie bounty hunter played by Jake Cannavale, who looks exactly like his father without any visible input from his mother, who boasts of being the daughter of Jewish director Sidney Lumet (Network) and the grand-daughter of black(ish) singer Lena Horne. Their bounty is an assassin played by Ming-Na Wen. The highlight of the episode is Amy Sedaris as a ship mechanic with a strong maternal instinct for the little green fellow. The plot is quite predictable.

Lucas’s films are extremely busy, and with the development of CGI, they only got busier. The same is true with Filoni’s animated series and the Disney movies. The Mandalorian is not so busy, which adds a sense of realism when one bumps into a droid or an alien monster. Even the Mos Eisley cantina is not so crowded. The special effects are also quite outstanding.

Another important stylistic change is the music. It is not John Williams, or imitation John Williams. Instead, Swedish composer Ludwig Göransson has created quintessential Space Western music by simply melding Ennio Morricone and electronica. His score is tasteful, tuneful, and catchy, with moments of deep feeling and epic grandeur. He even incorporates Williamsesque themes without ever sounding like Williams. I love John Williams’ Star Wars scores, but if Williams had scored this series, even he would have used a completely different sound.

I also liked the color palette of the first three episodes, which leaned heavily on chrome, magenta, and dark greens, like something went wrong with the technicolor.

When Death Star Abrams’s new technological terror is unleashed this month, I am predicting a huge flop. It may be the last big-screen Star Wars we get for a long time to come. So let’s hope The Mandalorian becomes the great series hinted at in the first three episodes. It is nice to know that at least part of the Star Wars saga is in the hands of Dave Filoni, a talented storyteller guided by a genuine love of Lucas’s vision and a demonstrated talent for carrying it forward—as opposed to envious mediocrities like Jar Jar Abrams and Rian Johnson, whose transparent motivation is to mechanically repeat Lucas’s original trilogy, this time as farce.

British Media Is Biased On Discussions Of Climate Change