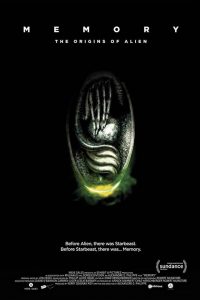 Director Alexandre O. Philippe has followed up his 2017 documentary on the shower scene in Psycho (78/52: Hitchcock’s Shower Scene) with Memory: The Origins of Alien, a documentary on the creation of Alien that attempts to chart the film’s wide-ranging influences and explore its mythic resonance. The result is an underwhelming muddle that lacks direction and often retreads old ground, particularly in an overlong segment on the chestburster scene. It shows the most promise when it examines the ancient roots of the Alien mythos, a topic that deserves more attention.

The melodramatic introduction, which is set at the Temple of Apollo in Delphi and depicts the Furies slinking about like alien larvae, suggests that something unusual will follow, but the documentary plays out like an ordinary bonus featurette, with a cast of talking heads that includes those who played a role in the filming of Alien as well as some academics and critics.

The first portion of the film details the life and influences of Dan O’Bannon, who wrote Alien’s screenplay. Growing up in rural Missouri, he devoured science fiction books and comics (among them Seeds of Jupiter, a 1951 EC comic to which Alien bears a striking resemblance). He and his father made the news one time for having faked a UFO landing.

The greatest influence on O’Bannon was arguably H. P. Lovecraft, to whom Alien is deeply indebted. Giger’s xenomorph is, of course, pure Lovecraft. As O’Bannon later stated, “That baneful little storm-lashed planetoid halfway across the galaxy was a fragment of the Old Ones’ homeworld, and the Alien a blood relative of the Yog-Sothoth.”

The ancient ruins on the planetoid indeed recall the city discovered by the Miskatonic University expedition in “At the Mountains of Madness,” or the ruins found in “The Nameless City.” Alien also brings to mind “The Color Out of Space,” (which O’Bannon read as a 12-year-old), in which the strange emanations of a meteorite poison all living organisms in Arkham and cause the townspeople to go insane and drop dead.

Lovecraft’s influence is most apparent in the film’s overall atmosphere. In O’Bannon’s words, Alien was “strongly influenced, tone-wise, by Lovecraft, and one of the things it proved is that you can’t adapt Lovecraft effectively without an extremely strong visual style. . . . What you need is a cinematic equivalent of Lovecraft’s prose.”

Alien grew out of Dark Star (1974), a short film co-written by Dan O’Bannon and John Carpenter when they were students at USC that Carpenter later expanded into a feature film. Carpenter directed, produced, and scored the film; O’Bannon edited it and designed the special effects, and also played one of the main characters, Sergeant Pinback. The film is about a spaceship, Dark Star, and one of its subplots is about a rather comedic-looking extraterrestrial creature that takes the form of a beach ball, which then breaks loose from captivity and leads Pinback on a chase through the ship until he is forced to kill it. The alien aside, the visuals and special effects are quite impressive considering the film’s budget of sixty thousand dollars.

Dark Star led to O’Bannon’s meeting Ron Shusett, who agreed to collaborate with him on the Alien storyline. O’Bannon had already written a 29-page screenplay by this time. He later collaborated with Shusett on Total Recall in return.

Alejandro Jodorowsky saw Dark Star and subsequently invited O’Bannon to design the special effects for Dune. Working on Dune was what introduced O’Bannon to Giger. He was floored by Giger’s work and showed his Necronomicon to Ridley Scott, who instantly agreed to hire him to design the xenomorph and the planetoid.

Giger combined a Lovecraftian sensibility with a deep knowledge of mythology. He was particularly fascinated with Egyptian religion: the arched figure of Nut, goddess of the cosmos, is shown on a mural depicting the life cycle of the xenomorph. The xenomorph’s shape also appears to have been inspired by the was scepter.

The mural was to be displayed in a grand pyramid whose interior would resemble an Egyptian temple. (In the original script, the humans find eggs in the pyramid belonging to a different race than the aliens, who are implied to have died at the hands of the mysterious creatures inhabiting the pyramid, foreshadowing the crew’s own fate.) The pyramid idea was scrapped because it was thought that it would be too familiar to audiences and not otherworldly enough. Giger made a new design, though the egg silo was ultimately merged with the derelict due to budget constraints.

That Nut was associated with the boundary between order and chaos is significant: the spaceship represents order and human science, while the planetoid is a wholly unknown, uncharted realm.

The precarious boundary separating order from chaos is a recurring theme in Alien. Minnesota-born comic book artist Tim Boxell, who worked on Death Rattle and is featured toward the beginning of the documentary, summarizes it thusly: “The Midwest may seem tranquil and civilized and so forth, but the fact is . . . you never know when the wheels are going to come off.” Death Rattle deals with similar themes: An astronaut accidentally breaks an ancient-looking statue, releasing a monstrous creature that transforms his body into a grotesque, corpse-like entity.

Giger derived much of his inspiration from dreams. He is described as having worked “like a blind seer” whose hands were guided across the page. One speaker makes an interesting remark to the effect that Giger’s synthesis of disparate influences (Egyptian art, Hindu iconography, Hieronymus Bosch, etc.) was not entirely conscious. He was simply unusually attuned to the collective unconscious, or Tolkien’s “Cauldron of Story.”

Ron Cobb and Chris Foss designed everything to do with the Nostromo, apart from the spacesuits, which were designed by Moebius, who also worked on Jodorowsky’s Dune. (Moebius had collaborated with O’Bannon on The Long Tomorrow, which was a significant influence on Blade Runner. He was hired as a concept artist for Alien but left due to competing obligations.)

The life cycle of the xenomorph was modeled after the parasitic wasp. Scott showed footage of wood wasps to the film crew during production. Parasitic wasps lay their eggs on or inside other arthropods, often caterpillars. They control the behavior of their hosts and eventually bring about their death. Caterpillars colonized by parasitic wasps that develop within their hosts appear wholly normal on the outside, just as Kane appeared normal to the rest of the crew after waking from his coma. But the host eventually bursts apart, revealing legions of parasitic wasp larvae. The theme of parasites attacking the body has an obvious parallel in hostile foreign populations infiltrating a nation.

Alien is essentially an allegory for the dangers of interacting with foreign species and allowing them to enter into one’s abode. The endoparasitism of the xenomorph is particularly reminiscent of the Jewish modus operandi of crypsis and covert control. Where Star Trek paints a utopian picture of inter-species cooperation and envisages a universe governed by enlightenment and progress, Alien speaks to the perennial nature of the friend/enemy distinction and the terror of the unknown.

The character of Ash is also comparable to a parasite. A sleeper agent working for a nefarious bioweapons corporation, Weyland-Yutani, he is under orders to bring back an alien specimen. He disobeys Ripley’s order not to readmit Kane into the spaceship after having been attacked by a facehugger and has no loyalty to the other crew members, whom he considers “expendable.” Ash looks indistinguishable from a human being, but he is an android (much like the Replicants in Blade Runner, which were termed “androids” in Philip K. Dick’s novel): a soulless, cold-blooded machine who has been programmed to serve the Company. He recognizes himself in the xenomorph and admires its ruthlessness and lack of remorse.

Ash likewise can effectively be interpreted as a symbol of Jewish subversion in that he can effortlessly pass as human (“hello, fellow white people”) but possesses a nature that is profoundly alien and inhuman. He feels no kinship toward humans and regards them as fodder for his profit-driven ends.

Scott subtly highlights Ash’s otherness. Ash is rarely seen in the same frame as other crew members. When Kane awakes from his coma, the crew assemble in the infirmary; Ash stands just outside the frame. The camera zooms in on him smiling smugly to himself as the others celebrate. During the dinner scene, the others exchange light-hearted banter while the camera cuts to Ash’s devious smirk.

The alien in the chestburster scene was Scott’s idea and was inspired by Francis Bacon’s Three Studies for Figures at the Base of a Crucifixion (1944), his first mature work. The triptych draws from both Christian iconography and Greek myth – the three figures represent the Furies from Aeschylus’ Oresteia. Bacon apparently learned of the Furies through T. S. Eliot’s play The Family Reunion, whose protagonist, like Orestes, is relentlessly hounded by them. In a curious case of synchronicity, Scott was unaware of the work’s mythological background when he showed it to Giger.

Francis Bacon, Three Studies for Figures at the Base of a Crucifixion

Like the Furies, the xenomorph is a chthonic creature aligned with femaleness, the embodiment of all that which is unknown, foreign, strange, chaotic, and terrifying. Its all-devouring jaws, as well as the planetoid’s cavernous landscape, conjure up an image of the womb.

The female’s devotion to procreation renders her inherently amoral, as her actions are dictated by this singular goal rather than by external systems of morality. The xenomorph is likewise devoted to this purpose and, as Ash admiringly observes, lacks a sense of morality or conscience. This is especially evident in James Cameron’s Aliens, wherein the Queen Alien jealously guards her eggs and ruthlessly retaliates against those who would threaten her offspring.

The xenomorph represents the vagina dentata (“toothed vagina”) and the possibility of spiritual castration inherent in sexual intercourse. Sex represents a temporary return to the gaping void of the womb and threatens to revert men to the state of primeval formlessness in which all life begins. To quote Camille Paglia, “The toothed vagina is no sexist hallucination: every penis is made less in every vagina, just as mankind, male and female, is devoured by mother nature.”[2] Paglia cites Medusa as an example: The snakes sprouting from her head are akin to vaginal teeth and represent, quoting Freud, “the terror of castration.”

Thus, Alien can hardly be construed as a pro-female film, in spite of its female lead. Indeed, Ripley was not written as an explicitly female character. Sigourney Weaver was only cast weeks before shooting. Nor is Ripley a feminist. Unlike modern female action heroines, she is not an omnipotent Mary Sue character who demeans men and engages in petty one-upmanship; she is merely an Everyman who is thrust into extraordinary circumstances.

Memory dodges the implications it lays out and carefully avoids coming to un-PC conclusions. The feminist commentator (who sports the classic “problem glasses” and has an extremely grating voice) claims that Kane’s impregnation is a means of atoning for centuries of female “oppression.” No mention is made of Lovecraft’s political views and the extent to which they are echoed in Alien. The references to Joseph Conrad throughout the film (the Nostromo, Narcissus, etc.) are interpreted solely as a commentary on the perils of colonialism and imperialism. By the same token, the xenomorph could be compared to savage non-white peoples – but this is obviously not mentioned.

This evasiveness is a glaring flaw in the documentary. Additionally, the segments on the film’s production mostly recycle the content of other documentaries, such as Charles De Lauzirika’s outstanding The Beast Within: The Making of Alien (2003), which is a much more comprehensive behind-the-scenes look at the making of Alien. Memory makes a commendable effort to probe the film’s mythic and psychological subtext, but the definitive documentary on this subject has yet to be made.

[1] O’Bannon and Scott claimed not to have seen Planet of the Vampires.

You can now ask Excel questions about your data – TechCrunch